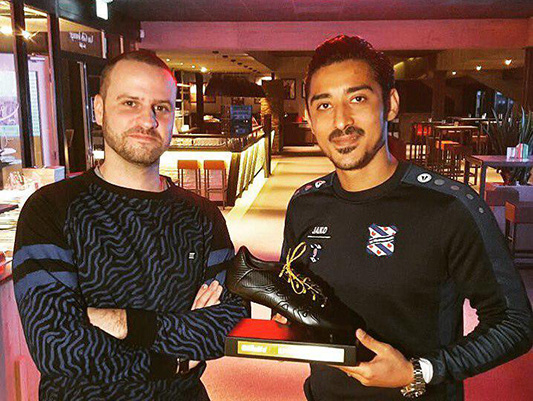 A Dutch website has given the Golden Lace Award to the Iranian striker of Eredivisie club Heerenveen Reza Ghoochannejhad.

Voetbal Inside has selected Ghoochannejhad as the best player of the Dutch league’s 19th week.

The Iranian international scored a hat-trick in Heerenveen’s match against PSV Eindhoven last Sunday (January 22) to become the Eredivisie’s top scorer with 12 goals at the end of the 19th week, according to a report by Voetbal Inside.

His award was presented to him by Voetbal Inside’s Simon Zijlemans.

In a Twitter post, Ghoochannejhad expressed his appreciation for receiving the prize and thanked his teammates and Voetbal Inside.

“Very grateful for winning this Award! Thanks to my teammates for all the effort and Voetbal Inside.”

By the end of Eredivisie’s 19th week, Ghoochannejhad has played a total of 1,651 minutes (more than 18 matches) for Heerenveen and has scored one goal every 138 minutes.

In the most thrilling match of the 19th week at the Philips Stadion, PSV scored two late goals to steal a thoroughly entertaining 4-3 win over Heerenveen, despite Ghoochannejhad’s hat-trick.

At the end of the Eredivisie’s 19th week, Heerenveen stands fourth in the table with 32 points.