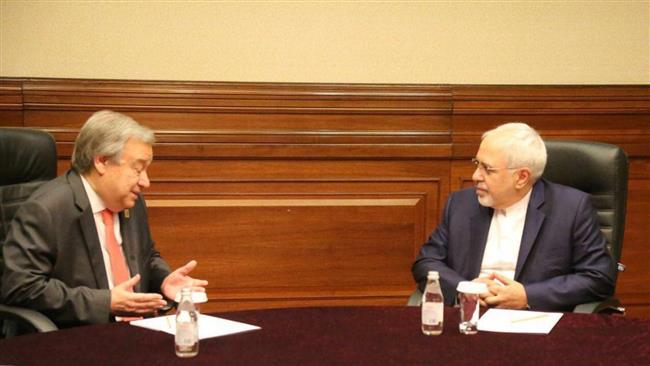 Zarif, who arrived in the Kazakh capital of Astana on Thursday to attend the Shanghai Cooperation Organization (SCO) summit and the opening ceremony of Astana Expo 2017, met with the UN chief on Friday.

Guterres condemned the terrorist attacks in the Iranian Parliament and the Mausoleum of the late founder of the Islamic Republic, Imam Khomeini, and expressed his sympathy with the Iranian government and nation.

On Wednesday, gunmen stormed Iran’s Parliament and the Mausoleum of Imam Khomeini, in two coordinated attacks. At least 17 people lost their lives and nearly 50 others were wounded in the assaults, which involved shootings and blasts.

The top Iranian diplomat and the UN secretary general also exchanged views about the latest issues in the Middle East, including the Syrian, Iraqi and Yemeni crises.

Pointing to a recent dispute among some Arab countries in the Persian Gulf, Guterres said only dialogue can settle the conflict.

Saudi Arabia and a number of its allies, including Egypt, the United Arab Emirates and Bahrain, severed their diplomatic ties and all land, sea and air contacts with Qatar on Monday, accusing Doha of supporting terrorism and extremism and interfering in their internal affairs, in the biggest diplomatic crisis to hit the region in years.

The UN chief also confirmed Iran’s fulfillment of its commitments under the landmark nuclear agreement, known as the Joint Comprehensive Plan of Action (JCPOA), reached between the Islamic Republic and the P5+1 group of countries.

The official stand of the United Nations is to support the spirit and text of the JCPOA as a historic agreement, he said.

The International Atomic Energy Agency on June 2 once again confirmed that Iran has been living up to its commitments under the JCPOA.

The sides discussed a variety of issues, including terrorist attacks in Tehran, the recent dispute among Arab states and the fight against terrorism in the Middle East as well as ways to bolster bilateral and multilateral cooperation.