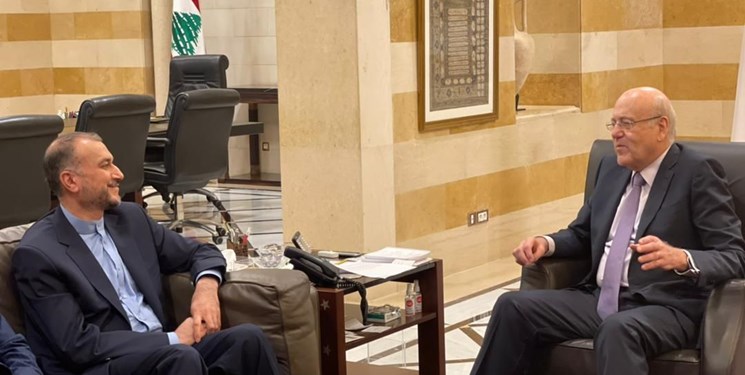 The Iranian foreign minister says Tehran is ready to supply Lebanon with its oil and gas needs based on international law.

Hossein Amirabdollahian made the remarks in a Thursday meeting with Lebanese Prime Minister Najib Mikati in Beirut.

In the meeting, Amirabdollahian, while congratulating on the formation of the new Lebanese government headed by Najib Mikati, said the Islamic Republic, as always, stands by the Lebanese people in every field and is ready to help this country.

The Iranian foreign minister explained the areas of cooperation between the two countries in the fields of energy, electricity, oil and gas.

He announced Iran’s readiness to help solve the problem of electricity shortage in Lebanon, supply the country with the oil and gas it needs within the framework of international law.
In the recent months the Islamic Republic has dispatched two shipments of fuel to Lebanon to help the country solve energy shortage. That was done under an initiative by the resistance Movement of Hezbullah.

Lebanon’s prime minister expressed gratitude for the good will of the Islamic Republic of Iran in expanding relations with his country. Mikati described Iran as a great and active economic power and stressed that Iran is powerful in the economic field. He said cooperation between the countries of the region and Iran is beneficial for the whole region.
Iran’s foreign minister also explained the policy of the Islamic Republic on the expansion of friendly relations with regional countries and on how to return to the nuclear talks and also its policy on the developments in Afghanistan.