Iranian Films to Be Screened at American Film Institute

Three Iranian features and a short film are going to be screened at various sections of the 32nd AFI Film Awards, which will be held in Los Angeles from November 8 to 15.

In the World Cinema section of this year’s AFI festival, the features films “3 Faces” by Jafar Panahi and “The Pig” by Mani Haqiqi will represent the Iranian cinema.

Besides, the Spanish-language film “Everybody Knows”, the latest work by Asghar Farhadi, will be shown as the special section of the event.

“3 Faces” and “Everyone Knows” were first unveiled at the 2018 Cannes Film Festival where Asghar Farhadi’s latest work was screened at the opening ceremony. 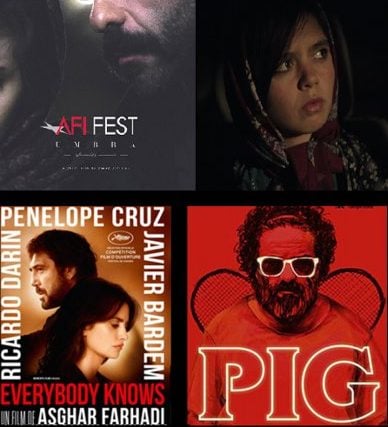 “The Pig” by Haqiqi was also first featured in the competition section of the 2018 Berlin International Film Festival.

The short film “Darkness” directed by Saeed Jafarian and produced by Rambod Javan has also been accepted to be screened at the AFI film festival.

“Darkness”, which was first featured at the Cannes Film Festival, was later invited to the Toronto International Film Festival as well.

The American Film Institute (AFI) is a US film organisation that educates filmmakers and honours the heritage of the motion picture arts in the United States.

AFI is supported by private funding and public membership fees. It is one of the best American festivals, and is said to be one of the most important film festivals in the world, approved by the Academy Awards.