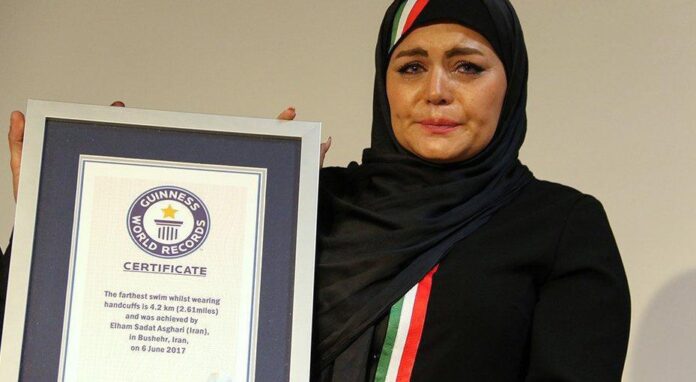 It is already a strange thing to hear that an Iranian girl has set a record in swimming. However, it becomes an extraordinary issue when one finds out she has swum in the open waters of Bushehr in southern Iran while wearing handcuffs for three hours to set an interesting record in Guinness Book.

Elham Asghari, the 36-year-old Iranian woman, says her dream has been realized and she has managed to have her name in the Book of World Records, even though the Guinness has not yet recorded her name in its website.

Since a few years ago she was swimming in Iranian waters to set a new record and now as she claims she has achieved her dream to have her name in the Guinness Book of Records.  According to her, she is the first Iranian female swimmer known globally.

Of course, Elham believes that this is just the beginning and she can beat more world records.

In a Farsi interview with the Shahrvand daily newspaper, Asghari said she has swum for three hours in open waters with her hands cuffed.

Q: You set a record in swimming in open waters with your hands cuffed! It’s Unbelievable!

A: I was practicing in Turkey for nearly one year. As all my exercises were carried out with Islamic dressing, my body reacted to the water of the lake and I got sick and could not be in training for nearly a year. At the same time, in Turkey, I applied for a Guinness world record, but in another item. Due to my injuries and sickness, I couldn’t set the record during the period asked by Guinness. Therefore, after getting better I applied once again, but it was rejected.

Q: Why did you decide to set a swimming record with your hands cuffed?

A: After these events, with the guidance of Mr Ziari, who is in charge of the Guinness office in Dubai, we found a new item and that was swimming with cuffed hands. The record belonged to an Italian man and no one had been able to break it within the past 10 years. Some in different parts of the world had tried to break the record, but all to no avail.  However, I was able to set a new record by swimming for 3 hours in the waters of Bushehr with tied hands.

Q: Did you face problems setting this record?

A: I am the first Iranian woman to set a record in swimming. When setting it, I had a full cover on. I was wearing a headscarf and body cover. Of course, the Guinness Representatives did not have the opportunity to be present in Iran, and we had to set the record by sending a video. It cost me nearly 300 million Rials (about 8,000 US dollars), while I did not receive any support.

Q: It’s unbelievable; why should a person swim with her hands cuffed?!

A: This item was already existing in the world and I was not the person to invent it. They put police handcuffs on me and I swam for 3 hours without using my hands. I was doing front crawl with hands cuffed. So, the pressure was on my waist. Before this, I was in a camp in Bushehr and practiced for a month and half. It was very difficult, but I could reach my goal because I had a high motivation. Of course, the skills learned in recent years helped me so much in setting the record.

Q: Now, are you looking for a new goal?

A: I would never stop because setting records is part of my life. Now, with my goal achieved, it’s a lot easier for me to break records in other Guinness items. My main goal is to become the Guinness main record holder in the water sports and swimming. They called me “the ambassador of perseverance”, so I will continue my swimming gear. With just setting a record nothing is over for me.