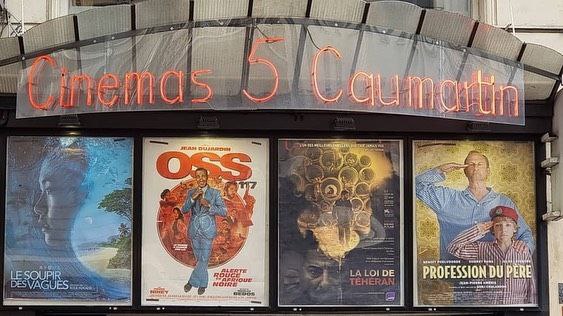 Over the past week, 40,000 French moviegoers have watched the Iranian award-winning movie “Metri Shesh-o Nim” (6.5 Per Metre), which rolled out in 265 theaters in France on August 9.

The great interest in the movie, which saw it rank fourth in the box office of some theatres in France this week, has led 20 more theatres to plan to show it this week.

But why the French welcomed “Metri Shesh-o Nim”?

The movie’s producer Seyyed Jamal Sadatian says the French are interested in his movie because they relate well to the police character (played by Payman Maadi), as the actor, despite censoring in Iran, has managed to closely reflect the reality of the society.

Sadatian made the comments during an interview with “The Open Parenthesis” program of the national radio’s Namayesh (drama) channel, which is produced by Maral Dousti. There, Sadatian offered his take on film-makers’ impact on the society and screening of “Metri Shesh-o Nim” in France.

One of the experts of The Open Parenthesis addressed the screening of the movie in France and the critical reviews in French publications that described the police character and the rebellion, shown in the movie, as a positive issue. He asked Sadatian why the French picked this film to watch despite the coronavirus pandemic.

“If I want to answer your question, we should see what the reaction of the people in Iran was to the movie. In Iran, people watched a movie in which the police character was acceptable to them, as censoring and interference in the story, whether in series or in screen movies, leads to the characters we seek to criticize, to be generally so remote from the reality that people cannot relate to them. That’s because, after all, everyone sees these characters around them and, based on their own observations, can judge these characters to see whether their pars can be seen in the society,” he said.

“Perhaps, the police and the criminal and other characters of Metri Shesh-o Nim were people whom people knew them. I think that is the reason behind the interest in this story both in Iran and in the several festivals where it was screened.”

“The movie was exciting for the French company that bought it. This movie was planned to be screened in France in March 2019, but the coronavirus pandemic put off its screening. It is interesting to know that, based on what the French distributor said three groups of cinema owners in France watched the movie and all of them related to it. Their argument was that the educational aspects of this movie can be very helpful for the French society, just like in Iran, and in terms of structure, the story has been told in a way that it leaves an impact on the people.”