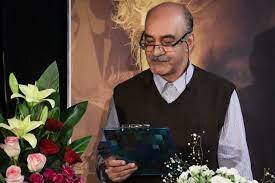 Renowned Iranian director Hamid Labkhandeh has passed away at the age of 70.

“He had an operation some time ago and unfortunately the surgery caused adverse effects and Embolus and he passed away at 6 PM on Saturday,” his son said.

Labkhandeh was born in 1951 in the southern city of Ahwaz and was introduced to theater when just 15. He then studied directing and acting at the Faculty of Fine Arts of the University of Tehran.

Labkhandeh shot to fame after he directed the TV series “Dar Panah-e To” – Under Your Protection – in the 1990’s. He went on to direct another highly popular TV series, “Dar Ghalb-e Man” – In My Heart – before he directed his sole movie for cinema, “Abi” – Blue – in 2000.

Over the past years, he was mainly focused on managing Samandarian Academy, after his long-time teacher and mentor Hamid Samandarian passed away.

Labkhandeh is also remembered by his theatrical production, Misunderstanding, and TV series “Mehr o Mah” – Moon and Love – and Stay With Me.