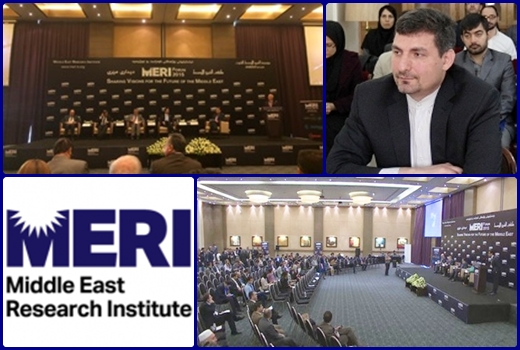 An Iranian diplomat has said that the situation in Iraq would have been much worse if Iran had not helped the country in its fight against ISIS.

Anti-Iran comments by David Pollock, a senior researcher at the Washington Institute, drew reaction from an Iranian diplomat who defended Tehran’s Iraq policies and its involvement in efforts to take on the terrorist group, ISIS, in Iraq.

At the annual Middle East Research Institute (MERI) – a new think tank in Erbil, Kurdistan Region of Iraq – Pollock made harsh comments against Iran. In reaction Alireza Miryousefi, the director of the Center for Middle East Studies, Institute for Political and International Studies (IPIS) who was present in the gathering said that ISIS would have captured Erbil after Mosul if Iran had not helped Iraq and consequently this gathering would not have been held here in Erbil.

Khabaronline.ir on November 4 published a report on the Erbil gathering, comments by the American panelist from the Washington Institute who talked about the role of Iran and Russia in the fight against ISIS and the reaction of the Iranian diplomat. The following is the translation of the report:

Immediately after Pollock’s speech, Miryousefi took the podium and addressed the hardline American panelist and said that ISIS would have taken over Erbil after Mosul if Iran had not got involved, adding if so, “this gathering would not have met in Erbil and you would not have been given the opportunity to attend the meeting and make critical comments on Iran.”

“After the occupation of Mosul, ISIS was closing in on Erbil. When ISIS was close to conquering the city, Erbil defenders made multiple appeals for help to the countries involved in the anti-ISIS coalition, but their appeals were not answered and Erbil was on the brink of being seized. [Back then] Iran was the only – it is better to say the first and last – country which responded to their calls for help and pulled Erbil from the brink of collapse”, said the Iranian diplomat.

He went on to say, “Mr. Pollock had better answer these questions: What was the reason behind the indifference of the countries which were part of the theatrical US-led coalition against ISIS to the threat hanging over Erbil? Why didn’t coalition countries try to help the city? Wouldn’t the situation in Iraq and the [entire] Middle East have been more catastrophic than now if Iran had not got involved to save Erbil and the city had fallen to ISIS?”

Miryousefi highlighted the fact that Iran is the most serious country as far as the fight against terrorism and ISIS is concerned and said, “According to reports released last year by a number of US think tanks and media outlets, the so-called anti-ISIS coalition has been – since start – a theatrical and disingenuous coalition which has been formed to score electoral points in the lead-up to US congressional elections and to calm the agitated US public opinion following the beheading [by ISIS] of a few American citizens. Do you have good enough reasons to reject these claims?”

The Iranian diplomat went on to slam America’s selective use of terrorist and extremist groups in the past and asked, “Do you think you can use ISIS or similar groups as a political tool, like what the US did in the 1990s by using Jihadi groups against the former Soviet Union? Does a selective and unreal approach to these groups help solve the problems and reestablish peace and security?”

Recalling remarks by David Pollock that ISIS has no popular support among the Saudis, Miryousefi said, “This comes as the latest polls released by Western sources show that around 92 percent of the Saudis support ISIS or sympathize with it thanks to the one-sided propaganda by the kingdom’s media circles. Is there any solid evidence to substantiate your new claim that the Saudi media and public opinion do not back ISIS and similar [terrorist] groups?”

Later in the gathering – which was attended by President Fuad Masum, the Iraqi parliament speaker and senior officials as well as Prime Minister of Kurdistan Region Nechirvan Barzani, head of the Islamic Supreme Council Ammar al-Hakim and a host of diplomats from other countries including Russia – Kobad Talabani, the deputy prime minister of Kurdistan Region confirmed the remarks of the Iranian diplomat and underlined Iran’s vital and decisive role in bringing Erbil back from the brink of collapse.

Talabani further talked about the night Erbil was on the verge of collapse and recalled his repeated, but vain, contacts with US officials to ask for help to save Erbil from falling into the hands of ISIS, and implicitly blamed administrative problems in the US decision-making structure for the negligence [of Washington].