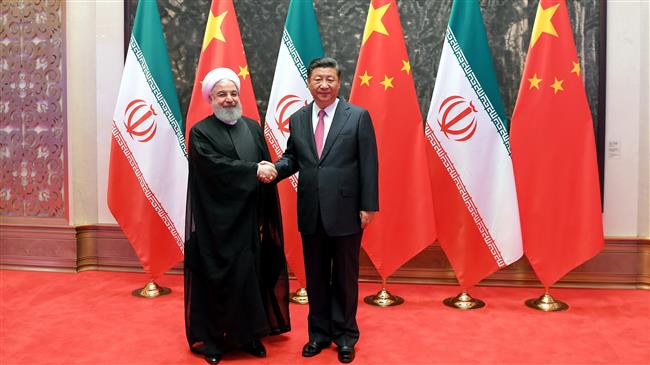 Iran's President Hassan Rouhani has conferred with his Chinese counterpart Xi Jinping on a multilateral nuclear agreement Tehran signed with the P5+1 group of countries in 2015 and mutual relations, particularly in economic and trade sectors.

During the Sunday meeting, held on the sidelines of a summit of the Shanghai Cooperation Organization (SCO) in the Chinese port city of Qingdao, the Iranian president said China played an important and effective role during the negotiations between Iran and major world powers which led to the conclusion of the historic nuclear agreement, officially known as the Joint Comprehensive Plan of Action (JCPOA).

“Now, Beijing has also a very important role in the reinforcement of the JCPOA and fulfillment of the other sides’ commitments,” Rouhani said.

However, US President Donald Trump announced on May 8 that Washington was walking away from the nuclear agreement, vowing to reinstate nuclear sanctions on Iran and impose “the highest level” of economic bans on the Islamic Republic.

US Secretary of State Mike Pompeo also threatened Iran with the “strongest sanctions in history” if it did not comply with a list of steep demands, including ending uranium enrichment.

In a Saturday meeting with Russian President Vladimir Putin on the sidelines of the SCO summit, the Iranian president said Russia plays a key role in maintaining the nuclear deal.

“After the US unilateral and illegal exit, Moscow has an important role in the reinforcement of the JCPOA and fulfillment of the opposite sides’ commitments,” he added.

He also pointed to fruitful cooperation between Tehran and Beijing in the fight against terrorism, extremism and smuggling which promoted regional stability and urged the two sides to further continue interactions.

China has been the first trade partner of Iran over the past years, he said, adding that enhanced banking cooperation would support the implementation of bilateral agreements.

Rouhani also stressed the importance of developing bilateral cooperation in the fields of culture, science and technology and expressed hope that the Chinese government would facilitate issues for Iranian businessmen and students including in the banking sector.

The Chinese president, for his part, said his country is determined to boost strategic cooperation with Iran and added that JCPOA is a great achievement of multilateralism which guarantees regional peace and cooperation.

Xi emphasized that the US seeks to change the international order through unilateral approaches and violation of regulations.

He also voiced Beijing’s strong opposition to Washington’s unilateral move to withdraw from the nuclear accord and re-impose sanctions on Tehran, emphasizing that the remaining signatories must fulfill their commitments under the JCPOA.

The Chinese president said Tehran and Beijing must boost cooperation at the United Nations, the SCO and the Confederation of International Contractors’ Associations (CICA) in order to counter the US unilateralism.

Speaking at a joint press point with Chinese Foreign Minister Wang Yi in Brussels on June 1, the European Union’s foreign policy chief Federica Mogherini said the bloc and China share commitment to preserve the nuclear agreement and to work for its continuation.

“Indeed, we are one hundred percent determined to continue cooperation between China and the European Union, but I can add also with Russia as it belongs to the signatory countries, but also with other partners internationally who are committed to preserve the nuclear deal and its full implementation,” the senior EU official said.

On the sidelines of the two presidents’meeting, Iran and China also signed four memorandums of understanding for cooperation in various fields.

The second MoU pertained to Iran’s cooperation with China for preventing and fighting illegal production, smuggling and abuse of all kinds of narcotics, psychedelic drugs and their precursors.

The third memorandum of understanding was signed between Iran’s Securities and Exchange Organization and the China Securities Regulatory Commission (CSRC) for cooperation.

The last MoU stressed the formulation of a plan for cooperation between Tehran and Beijing with the framework of China’s Belt and Road Initiative.