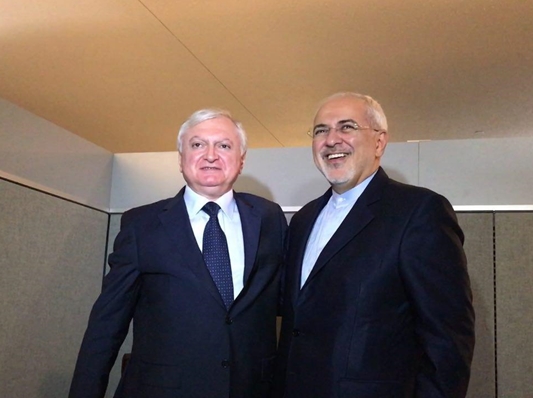 Iran's Foreign Minister Mohammad Javad Zarif and his Armenian counterpart Eduard Nalbandyan have discussed issues of mutual interest in a meeting in Yerevan.

During the Tuesday talks, Zarif referred to the long-standing relations between the two neighbouring states, and called for expansion of bilateral ties in various political and economic aspects.

He also highlighted the importance of a meeting of Iran-Armenia Joint Economic Commission and a business forum between the two countries, saying the activities of private sector pave the way for expansion of economic relations.

The Iranian top diplomat underlined Tehran-Yerevan cooperation in the fields of oil, gas, power, transit, transportation facilities, resolving the problems of companies, and increasing connections between the Iranian and Armenian people.

Nalbandyan, for his part, expressed his pleasure with the visit of Zarif and his entourage to Yerevan, and said the relations between the two states are growing.

“Armenia is prepared to deepen and develop its ties with the Islamic Republic of Iran, particularly in the economic field,” he added.

Zarif arrived in the Armenian capital earlier in the day at the head of a high-ranking political and economic delegation.

Upon arrival, Zarif told the IRIB News Agency that the Islamic Republic’s policy is based on developing its ties with all neighbouring countries, including Armenia.

He said Iran and Armenia have good economic relations with each other, but have not yet tapped into the existing potentialities.

“During the visit, I’m being accompanied by a very good business delegation, which includes great entrepreneurs. We are here to explore avenues for enhancing economic relations and resolve certain problems that hinder the implementation of some joint projects.”

Zarif also noted that Tehran has good cooperation with Yerevan in various fields, and expressed the hope that his visit would lead to expansion of ties and revival of collaborations between the two countries’ private sectors.