Iran will retaliate if P5+1 reneges on JCPOA promises: Larijani 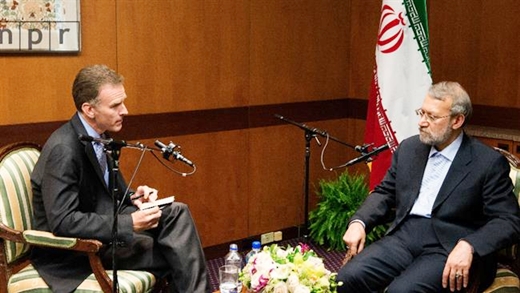 The top Iranian MP has described the conclusion of the nuclear talks as acceptable yet far from perfect.

The speaker of Iran’s parliament has said that Tehran will “retaliate” in case the world powers break their commitments under the Joint Comprehensive Plan of Action (JCPOA) over the Iranian nuclear program.

In an interview on Thursday with the US National Public Radio (NPR), Ali Larijani said that he believes those “who want to wreck” JCOPA “are going to find new ways to perforate” the agreement.

He also described as “acceptable” the conclusion of Iran’s nuclear talks, however, adding that it is far from being perfect.

“My overall view is that it’s an acceptable deal. I believe we can use this deal as a step we can take to move forward. And at the same time it’s not flawless,” he added during the interview, which will be aired on September 8.

According to Iran’s senior lawmaker, improving the economic status will top Tehran’s agenda after the implementation of JCPOA and removal of anti-Iran sanctions.

“We should not spend our energy in areas which cannot bring about palpable or concrete changes in the livelihood of the people. We should try to focus on the economy and make a difference there,” he stated.

Larijani lashed out at US officials’ hostile rhetoric at the present time when, he said, both sides should be “paving the ground for the ratification and the implementation” of the nuclear accord.

“Every day it seems that your secretary of defense wakes up in the morning, opens the window, he shouts something at Iran and says that the military option is still on the table. If you really want to have war, then just go with it. Why are you just talking about it all the time?” he noted.

Larijani further hinted at a possible prisoner swap between Washington and Tehran over the case of Jason Rezaian, The Washington Post’s correspondent who is standing trial in Iran over espionage and other security-related charges.

“There are practical ways of course. For example, there is a number of Iranians in prison here [in the US]. Definitely for matters of this sort, one can come up with solutions. I think your politicians know about those ways,” the Iranian official stated.

His remarks came days after Iranian Foreign Ministry Spokeswoman Marzieh Afkham called for the release of 19 Iranian nationals languishing in US jails on charges of bypassing anti-Iran sanctions.