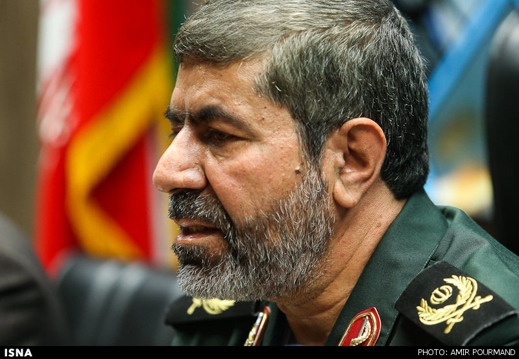 The head of the Intifada and Holy Quds Central Office in Iran has said that Tehran will carry on supporting the oppressed and defying the oppressors and occupiers.

The head of the Intifada and Holy Quds Central Office in Iran has said that Muslims should relay the following message to the world on Quds Day rallies: the Zionist regime and Zionism are the number-one enemies of the world of Islam.

Brigadier General Ramezan Sharif made the remark in a meeting of Quds Day rally organizers and added that arrogant powers, led by the United States, are pushing hard to wage proxy wars in order to divert the attention of the world, especially the Muslims, from the number-one issue of the Islamic world which is Intifada and the Holy Quds.

The following is the translation of what else the Islamic Students’ News Agency (ISNA) quoted Sharif as saying on June 18:

The Islamic resistance and Islamic Awakening have better conditions and a brighter prospect today, seeking the support of all free-spirited Muslim nations and governments despite efforts by the Zionist regime which has the financial, military and diplomatic support of the US and its regional allies, he said.

Sharif further said that the enemies have totally failed in their attempts against the [Palestinian] resistance and the Islamic Awakening over the past several years, adding the wars the Saudis have recently waged [in the region] are further proof of that.

Grappling with domestic problems after the death of King Abdullah, Saudi Arabia has been also hit by a power struggle within the ruling family, he said.

Thanks to designation by the late Imam Khomeini of the last Friday of the fasting month of Ramadan as International Quds Day, the regional and international spotlight has been turned on the Islamic resistance with a focus on liberating the Holy Quds from the occupation of the usurping Zionist regime, Sharif said.

He went on to say that the late Imam and the Supreme Leader have always pursued the question of Palestine and liberation of the Holy Quds as a basic strategy which unites the world of Islam, adding supporting the ideal of the Holy Quds has been and will be an inseparable part of the Islamic Republic of Iran’s foreign policy.

Sharif also said that we will back the supporters and defenders of Palestine and its ideal no matter where they are and will stand up to Zionism and its allies across the globe.

He further said Iran will support all those who support the Palestinian cause. “If they give up their support or back out on any ground, Iran will act in line with the Supreme Leader’s remarks and carry out its religious and legal responsibility which is support for the oppressed and defiance of the oppressors and occupiers”.