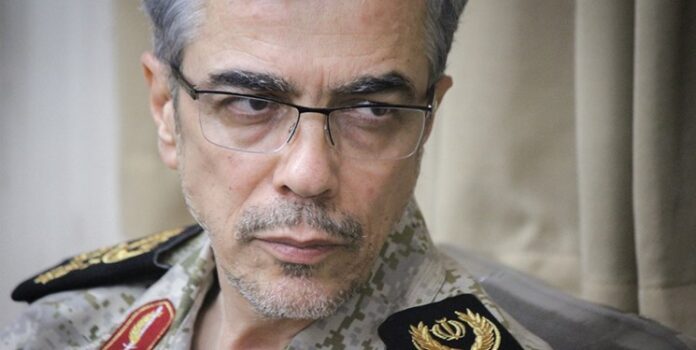 A senior Iranian military commander says hegemonic powers should be awaiting harsh vengeance on a par with the US assassination of top Iranian military official Major General Qassem Soleimani.

Major General Mohammad Baqeri said Iran’s missile attack on a US base in Iraq in revenge for the slaying of General Soleimani was a “temporary balm” for this tragedy of the Muslim world.

The top commander underlined the violent assassination of General Soleimani by the criminal US regime was testimony to “state terrorism.”
General Baqeri further slammed Washington for slapping bans on Iran amid the coronavirus pandemic.

“The peak of the United States’ savagery becomes evident when it imposes the toughest economic sanctions, so much so that it has become very difficult to procure medicines for patients,” said General Baqeri, the chairman of the General Staff of the Iranian Armed Forces.

“Enemies are planning to destroy the Islamic community by sowing discord,” he said.

“Painting a violent picture of the Islamic community is only one of the small pieces of the Islamophobia puzzle,” the top commander said.

“The Muslim community is experiencing a critical juncture now. Today all Takfiris and atheists are confronting pure Islam and they leave no stone unturned,” he said.

“Some heads of Islamic states have now become so brazen that they have resorted to the wicked United States and have backstabbed the Islamic community by normalizing their relations with the Zionist regime [of Israel],” General Baqeri said.

“These rulers have relied on a hollow power called the US, which itself is on the decline and is scared of the resistance front,” he noted.

He further urged the Muslim community to remain united against enemies.
“The enemies of Islam make the most capital out of internecine conflicts within the Islamic community, and we should prioritize the realization of unity,” he said.