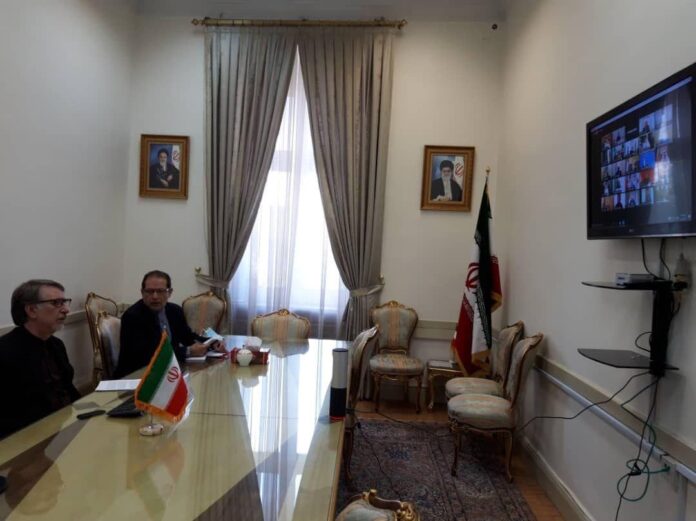 Iran’s Deputy Foreign Minister for International and Legal Affairs has taken part in an extraordinary ministerial meeting of the Organization of Islamic Cooperation (OIC) Executive Committee on Israeli threats to annex parts of the occupied Palestinian territories.

Following Israel’s recent announcement of its plan to annex parts of the occupied territories, particularly the west bank of Jordan River, to the territories under occupation within the next month and the US government’s support for the plan, the Executive Committee of the Organization of Islamic Cooperation held a virtual extraordinary meeting at the level of Member States’ Foreign Ministers on Wednesday, June 10, to address the issue.

The meeting, held at the request of the Palestinian National Authority and at the invitation of OIC Secretary General Yousef bin Ahmad Al-Othaimeen, was attended by the Ministers of Foreign Affairs and other political officials from the OIC Member States. Iranian Deputy Foreign Minister for International and Legal Affairs Mohsen Baharvand was representing the Islamic Republic of Iran in the meeting.

In his address to the virtual meeting, Baharvand reaffirmed the Islamic Republic’s “unwavering stance on defending the cause of Palestine”, and expounded on Iran’s views on Israel’s current threats, its main sponsor, namely the US, and on the effective solution to such persistent crisis in the Islamic world.

The Iranian diplomat strongly condemned Tel Aviv’s measure to declare Jerusalem al-Quds as its capital, its announcement of plans to annex parts of the occupied Palestinian and Arab territories, and the US’ support for those measures.

He also highlighted the “definite ineffectiveness of the policy of negotiations with and appeasement towards Israelis”, saying it is absolutely necessary for Muslims to think seriously about devising new approaches to Palestine in order to guarantee the inalienable rights of Palestinians to restore their legitimate rights.

“Now that it has been definitely proven that the US government has no goodwill and the Zionist regime is viciously and hypocritically playing with Palestine and with the principle of formation of the Palestinian government, the Islamic world is currently in dire need of ratification and implementation of a true pragmatic policy far beyond the current futile policy.”

Elsewhere in his remarks, the Iranian Deputy Foreign Minister underscored the international recognition of the right to self-determination, denounced the fierce obstructionism and opposition from the US and its cohorts to the issue of restoration of such inalienable right of Palestinians, and said that is why the people of Palestine have now no option but to resort to resistance in order to fulfill the undeniable right to self-determination.

The Islamic Republic of Iran and its Leader have repeatedly proposed the idea of approving a plan to hold a countrywide referendum with the participation of all Palestinians inside and outside Palestine with every religious and political background, he added.

“Now it’s time for the Organization of Islamic Cooperation Member States to pass a resolution to call on the United Nations – as the chief international organization responsible for protecting world peace and security – to resolve the most long-running predicament in the contemporary world by holding a referendum in Palestine.”

Apart from a number of Ministers of Foreign Affairs and other political officials from the OIC Member States, OIC Secretary General Yousef bin Ahmad Al-Othaimeen was also taking part in the virtual extraordinary meeting of the Executive Committee of the Organization of Islamic Cooperation.

At the conclusion of the meeting, a draft resolution was approved with 15 executive articles revolving around the categorical condemnation of Israel for its “malignant scheme” to annex parts of the occupied Palestinian territories.

The resolution has also condemned Israel for restricting and obstructing the Palestinian people’s access to the necessary facilities and equipment for treatment of and protection against the disease caused by the coronavirus.