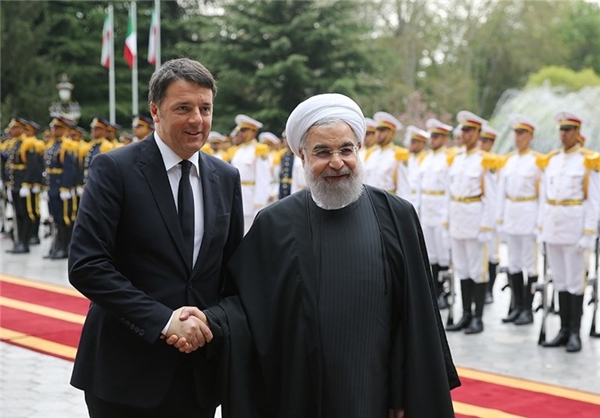 Iranian President Hassan Rouhani called for accelerated efforts to fully get rid of the fears for trade with Tehran that persist from the time of anti-Iran sanctions.

Speaking to reporters in Tehran on Tuesday after a meeting with Italy’s prime minister that concluded with the signing of six agreements, President Rouhani said although a lasting nuclear deal between Iran and the Group 5+1 (Russia, China, the US, Britain, France and Germany) has terminated the banking and trade sanctions on Tehran, there still remain some details that should be resolved more quickly.

Stepped-up efforts are required to wipe out the “psychological atmosphere” remaining from the era of sanctions, Rouhani added.

He further noted that finalization of 36 cooperation documents between Iran and Italy over the past three months would make way for closer economic relations, particularly in investment and importing new technologies from Italy.

Rouhani said he has also held talks with Matteo Renzi on the need to counter Islamophobia and to ramp up efforts to settle regional conflicts, as those in Afghanistan, Yemen, Iraq, Syria, Lebanon and Libya.

Iran and Italy are resolved in the fight on terrorism and providing humanitarian help for the people of Yemen and Syria, the president added.

For his part, the visiting Italian premier hailed the new ties between Tehran and Rome as a historic chapter in their bilateral relations.

Renzi also said he is accompanied by representatives from Italy’s major banks, financial institutes and insurance companies, because strong economic relations hinge on their active role.

Making a reference to the 43rd annual summit of the Group of Seven (G7), due to be held in Italy in 2017, Renzi said Rome will try to fully end what has remained from the anti-Iran sanctions and create a better atmosphere for economic interaction with Tehran.

The trip comes around three months after President Rouhani made a landmark visit to Italy.