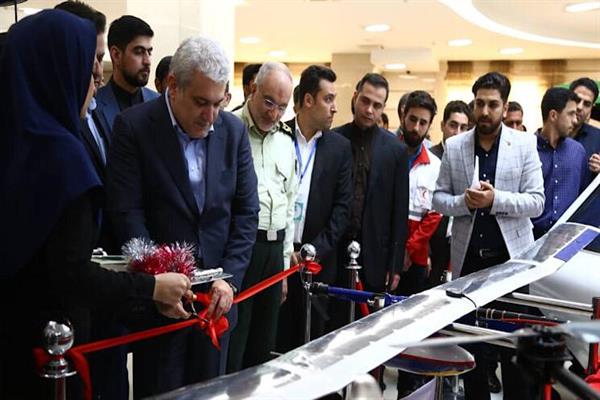 Several new UAVs have been unveiled in an exhibition to showcase the country's capabilities in drone-related technologies.

The four drones were unveiled in a ceremony attended by Vice president for science and technology Sorena Sattari who visited the exhibition and also unveiled a new drone application.

Sattari said products manufactured and marketed by technology activists in the field are advanced, competitive, and efficient, and sometimes better than other examples available in international markets.

He added that the priority of the Vice Presidency is the introduction of UAV experiences and achievements to the defence sector in order to further strengthen the country’s defence industry.

“Iranian-made drones are used in various fields of agriculture and surveying, and they have been welcomed by various industries and organisations as many of the time-consuming and costly tasks are facilitated by these drones,” underlined Sattari.

A light surveillance drone equipped with a thermal camera was one of these unveiled achievements. This UAV is equipped with day and night camera and triaxial image recorder. It can fly for 60 minutes nonstop.

Another product was an specialised mapping drone that does not need ground control points. This drone can fly for 90 minutes and is equipped with a PPK-RTK positioning system to accurately capture image centres. Its maximum speed is 120 kph which can be used for offline and on-the-fly missions. This UAV can automatically return to its starting point.

Specialised Mapping Drone that does not need ground control points (GEN-X2) is another unveiled product that can fly for 60 minutes. It is equipped with a 2-megapixel mirrorless camera.

Another UAV was the solar one that features a 4-hour flight continuity. It weighs 1.2 kg and has a flight limit of 10,000 feet.

An application for commercialisation of drones and three other achievements in this field were also introduced at this exhibition.

50 knowledge-based companies and start-ups active in drone-related areas have participated in this event.