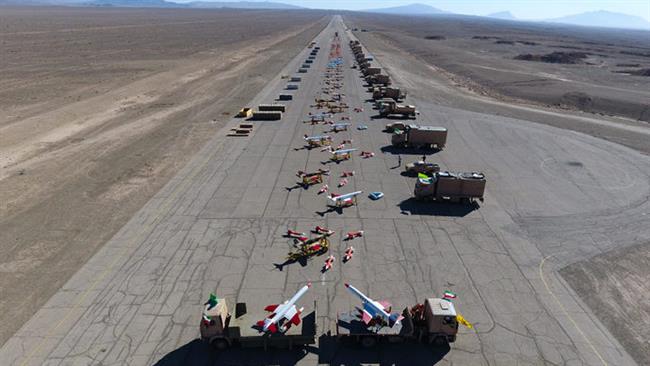 Iran has unveiled an Unmanned Aerial Vehicle (UAV) base for its fleet of drones which have given the country a remarkable capability in the fight against terrorists and protecting its borders.

Head of the Khatam al-Anbiya Air Defense Base Farzad Esmaili (seen below) inaugurated the airstrip on Sunday, as the headquarters released a video of UAVs parked on the tarmac at the undisclosed site.

In an address to the inauguration ceremony, Esmaili described Iran’s drone capabilities “an award for the heroic nation,” as he sent a stern warning to the country’s enemies.

“Maybe, the enemy thinks it can attack us. But the main question is how it is supposed to escape unscathed,” he said.

Iran is regarded as a bona fide drone power among a few countries with operationally deployed armed drones and its extensive unmanned aerial vehicle program dates back to the Iraqi war of the 1980s against the Islamic Republic.

Esmaili said, “Air defense centers throughout the entire territory of the Islamic Iran work in tandem with the indigenous integrated air defense command and control system.”

Iran’s UAV program has expanded in recent years with more than a dozen models operating for a variety of functions ranging from surveillance, to intelligence gathering, carrying bombs and Kamikaze operations.

They have been playing a significant role in the fight against Takfiri terrorists as well as monitoring US warships in the Persian Gulf.

Esmaili touched on Iran’s downing or capture of intruding drones, including an Israeli Hermes which was shot down in October 2014.

The Islamic Revolution Guards Corps (IRGC) said at the time that its forces intercepted and hit the spy aircraft on its way to the Natanz nuclear facility in the central Isfahan province.

In December 2011, Iran grounded a US RQ-170 Sentinel, using electronic warfare techniques, as the stealth aircraft was flying over the Iranian city of Kashmar near the Afghan border.