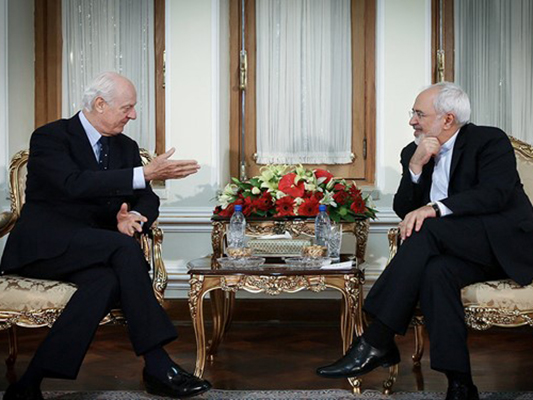 During the meeting held in Tehran, Zarif and de Mistura conferred on the latest political and field developments in Syria and the political initiatives to settle the crisis through dialogue.

De Mistura’s visit to Iran has come ahead of the next round of Syria peace talks in Kazakhstan’s capital city of Astana, slated to be held in mid-September.

The Kazakh Foreign Ministry said in a Tuesday Facebook post the timing of the talks would be set at a meeting in late August between experts from Russia, Turkey and Iran and “provisionally, we could be talking about mid-September.”

Astana has hosted five rounds of peace talks for Syria since January. Russia, Iran, and Turkey serve as guarantor states in the peace process. The negotiations are aimed at bringing an end to the foreign-backed militancy in Syria, which began in March 2011.

The Astana talks have so far resulted in an agreement on four de-escalation zones across Syria.

According to the Russian Foreign Ministry, three of the enclaves have been created to date, in the country’s sprawling central province of Homs, in the Eastern Ghouta area of the southern Rif Dimashq Province, and a southwestern militant-controlled stretch along the border with Jordan.