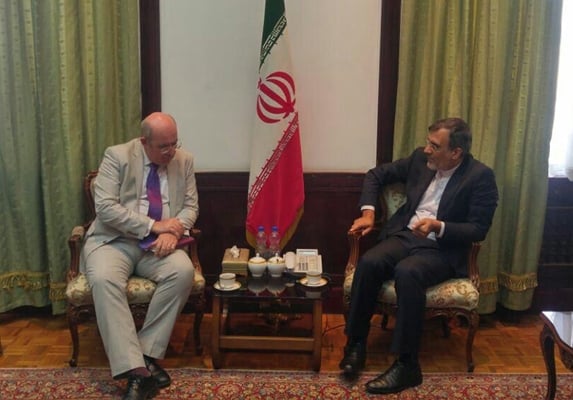 Hossein Jaberi Ansari, a senior assistant to Iran’s foreign minister, and Martin Longden, the UK’s Special Representative for Syria, have discussed the possibility of working together to return stability to Syria.

During the Saturday meeting in Tehran, Jaberi Ansari said a central plank of Iran’s regional policy is the necessity of putting an end to the Syria crisis.

“Humanitarian issues have always been of great significance to Iran during the Syria crisis, and Iran’s policy in that regard is crystal clear,” said the senior Iranian official.

Jaberi Ansari said Iran, as one of the biggest victims of chemical weapons, is seriously opposed to the use of such arms in any conflict in whatever shape or form.

He said Tehran is adamantly opposed to unilateral actions by certain countries which have described themselves as the prosecutor, judge and executioner of decrees and seek to take advantage of this issue as a tool to realize their failed political objectives in Syria.

Jaberi Ansari elaborated on the efforts being made within the framework of the Astana talks aimed at settling the Syria crisis, saying Iran has always sought an intra-Syrian dialogue and tried to boost confidence between the Syrian government and people.

He said Iran also stands ready to work closely with European countries, including the UK, to help end the crises in Syria and Yemen as soon as possible.

The British Syria envoy, in turn, expounded on his country’s policies vis-à-vis the Syria crisis and expressed misgivings over the situation and future of Idlib as well as the possibility of chemical weapons being used in the region.

He welcomed Iran-Britain cooperation on the Syria crisis and expressed London’s readiness to contribute to efforts to end the Syria conflict and return stability to the country.