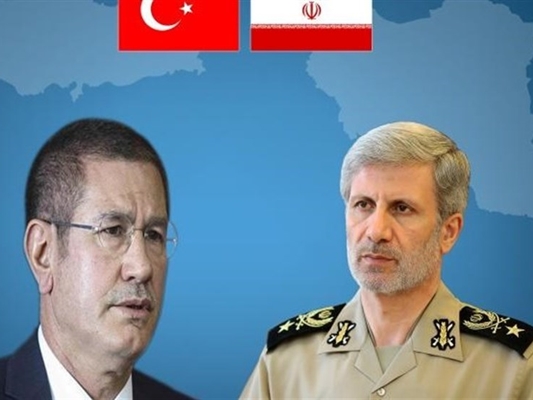 The defence ministers of Iran and Turkey have slammed as a major flaw the US president’s decision to recognize Jerusalem al-Quds as the capital of the Israeli regime.

In a telephone conversation with his Turkish counterpart, Iran’s Defence Minister Brigadier General Amir Hatami said that Trump’s decision comes after the defeat of the United States in Iraq and Syria, their failure to declare Iraqi Kurdistan independent, and their dismay after the compulsory resignation of the prime minister of the Lebanon.

“The US decision to relocate its embassy to Jerusalem al-Quds is an irresponsible policy to reinforce the occupying approach of the Zionist regime. We do believe that this move is the result of differences in the Muslim Ummah and the compromise of some Arab states with the Israeli regime,” added Hatami.

Referring to the crimes being committed in Yemen, the Iranian minister called the brutal murder of the Yemeni people a full-fledged humanitarian crisis, saying that the international community and Muslim countries should be more concerned about the end of bombardments and the siege of the oppressed Yemeni people.

According to a Farsi report by IRNA, Hatami further pointed to the development of defence cooperation between Iran and Turkey, and stressed that “we welcome the expansion of bilateral collaborations in military, defence industries and the exchange of educational and research experience to enhance the level of defensive capabilities.”

Expressing satisfaction with the current level of relations between the two countries and their interactions regarding the regional developments, General Hatami said some regional and international powers have been seeking to create division between Iran and Turkey over the past few years, but their conspiracy has failed thanks to the will of the leaders of the two countries.

Elsewhere in his remarks, the Iranian minister congratulated the government and the people of Turkey on the annihilation of ISIS, saying, “The destruction of ISIS is an example of regional cooperation and the result of interaction between Iran, Turkey and Russia, which has angered the Zionists and the US government.”

For his part, Turkish Minister of National Defence Nurettin Canikli pointed to the commonalities of the two countries, noting that the recent developments in the region highlighted the need for cooperation between Iran and Turkey.

He also noted that no power can affect the friendship and fraternity between Tehran and Ankara.

Canikli condemned Trump’s decision to declare Jerusalem al-Quds as the capital of the Israeli regime as a great mistake, adding that the decision is not accepted by any Muslim in the world.

At the end of the conversation, Canikli accepted the invitation of his Iranian counterpart to take a trip to Iran and emphasized the importance of defence cooperation between the two countries and also continuation of bilateral interactions within the framework of Astana Talks on Syria.