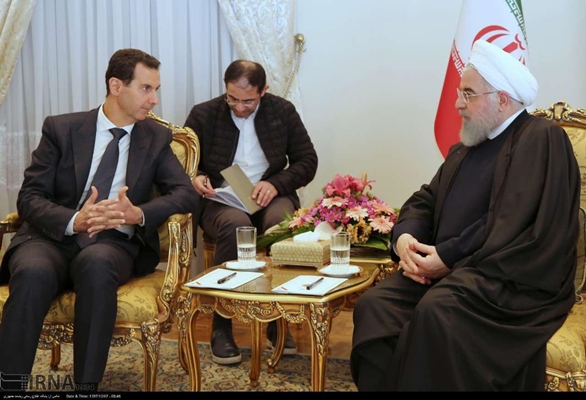 Iranian President Hassan Rouhani says Iran will remain behind the Syrian government and nation and added the mutual relations between Iran and Syria are based on brotherhood and unity.

In a meeting with Syrian President Bashar al-Assad in Tehran on Monday, Rouhani said guidance offered by Leader of the Islamic Revolution serve as a bankroll for further cooperation between Iran and Syria.

President Rouhani then described Syrian government and nation’s victories against terrorists as highly significant and added the Islamic Republic will withhold no support for Syria in its fight against terrorism.

“Iran will continue to offer help to Syrian government as part of efforts to restore stability, prepare the ground for refugees’ return and handle domestic politics,” he said.

He then cited deep religious and cultural commonalities as the main bond linking Syrian and Iranian nations together and said the relations between the two sides are based on brotherhood and unity.

Elsewhere, Rouhani expressed satisfaction with the security established in Syria thanks to multilateral cooperation established in the region and said during the recent Sochi summit, Iran, Russia and Turkey underlined the need to preserve Syria’s sovereignty and called for an end to any foreign troop’s presence in the Arab country.

Iran’s president also referred to the latest visit of Iranian vice president to Syria, describing it as positive and successful.

“Iran and Syria have set a clear roadmap to expand further their mutual relations in various political, economic and cultural areas,” he noted.

For his turn, Syrian president expressed his government and nation’s gratitude to the brotherly support by Iran’s leader, government and nation in fight against terrorism and efforts to restore security to the war-torn country and said he has travelled to Tehran to thank in person the Iranians for their support.

“Today, Syria enjoys more stability and security compared to the past, “he noted.

The Syrian president also underlined that Damascus supports Iran’s approach towards regional issues as well as multilateral cooperation established during Astana and Sochi talks to restore peace and Security in Syria.

He then added Iran and Syria have already established close ties in various regional and international issues through meetings between their foreign ministers and special envoys and said the political process in Syria should prepare the ground for ruling of Syrian nation’s will as well as preserving the country’s dependence and sovereignty.