Iran to Help US Quit Its Addiction to Sanctions: Zarif

Iran’s top diplomat says the country is determined to foil the US’ plot to use sanctions to bully Iran and make what it calls a change in Tehran’s behaviour.

Mohammad Javad Zarif says “the history of US foreign relations shows this country has imposed many sanctions against many countries. Under [US President Barack] Obama, this addiction to sanctions prevented them from carrying out duties and obligations.”

“We can turn this pressure into boosting domestic production and non-oil exports and show Americans they must overcome their addiction,” he told a gathering of Iranian ambassadors and representatives of private firms in Tehran on Sunday, ISNA reported.

He also noted that Iran’s branches of power have joined hands so that Iran can pass the current “serious situation” and turn the threats into opportunities.

The Trump administration walked out of the 2015 nuclear deal early May and threatened to impose harsh sanctions on Iran that will “destroy the Iranian economy”, unless Iran caves into demands by the US regarding its defense and regional policies.

Other parties to the nuclear deal, the three European powers of Germany, Britain and France, as well as China and Russia, have denounced the US’ withdrawal and vowed to remain committed to the pact.

Iran has announced its continued commitment to the deal hinges on EU’s binding guarantees assuring Tehran its interests will be served if it remains in the deal.

Zarif said the situation for Iran is quite different than 2000s and early 2010s, when international sanctions were imposed on Iran over allegations it intends to build nukes.

The top diplomat said Washington has stood against the world, leading countries to be on Iran’s side.

“We believe the world has reached the conclusion that America must overcome its addiction to sanctions,” he said.

Zarif said the US, despite its enormous economic power, feels it is marginalized and needs to impose political pressure on others to advance its agenda.

“The Americans have to place pressure on banks and foreign governments so that they act against their international obligations,” he said. 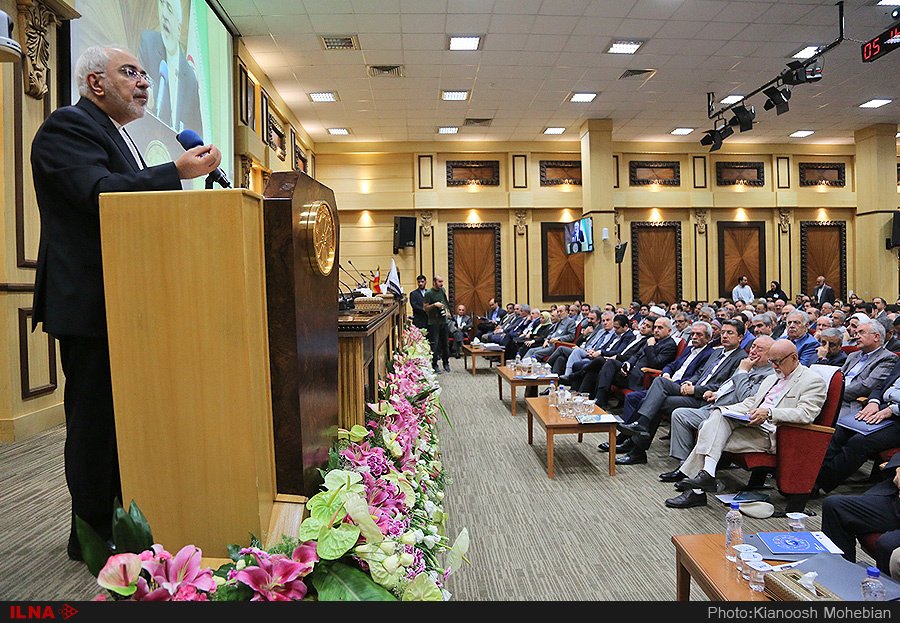 Zarif said Washington’s behaviour has also created a gap between the US and Europe in various fields, including the economic field.

The top diplomat said Iranian private firms could use opportunities to foil the US’ plot, particularly engaging in economic cooperation with small and medium-sized European countries.

Zarif said increased cooperation between Iran and Europe depends on the former, who has to make a big choice.

“Europeans and their economic actors must decide if they want to choose Europe’s interests or they want to follow the interests of the US and [President Donald] Trump,” he said.

The EU has developed a package to convince Iran to remain in the deal and salvage the 2015 nuclear deal.

Iran and the EU are currently in talks to finalize the content of the package.