Iran stands by Syria because it backs justice and truth 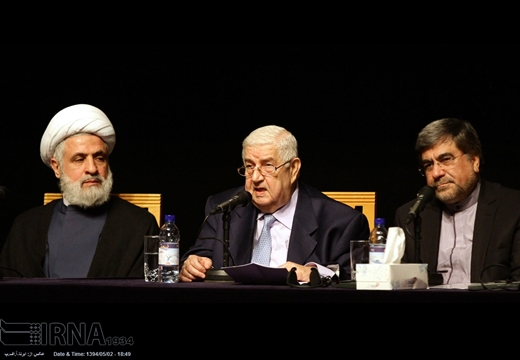 Iran’s culture minister has said that all those involved in the resistance front should be actively present in the fight against Zionism, Takfirism, ignorance and bias which has its roots in misinterpretation of Islam.

The minister of culture and Islamic guidance has said that Iran, which has always been a backer of the truth, justice and the oppressed, stands by Syria.

Ali Jannati made the remark in an address to the International Media Conference Against Terrorism in Damascus on Friday and added this gathering provides an opportunity to contemplate and learn. He further said the gathering builds a bridge between thinkers, helping them learn about each other’s valuable experience and reach cultural and social common ground.

The conference discusses – among other things – the role mass media play in confronting terrorism and future visions for mass media. It also discusses the function of media in the ongoing conflicts across the world and measures needed to form a united front in the fight against terrorism.

The Islamic Republic News Agency (IRNA) on July 24 published Jannati’s remarks in the conference. The following is the translation of what else the Iranian minister said there:

This gathering is also an opportunity to hammer out mechanisms to stop violence and extremism the Takfiri movements have stirred up in the countries [which are part of the axis] of resistance, including Syria and Iraq in a bid to destroy their cultural principles, identity and historic civilizations.

The history of human race is rife with junctures similar to what the world of Islam, our region in particular, is experiencing today: vain conflicts. Over the course of the past centuries, in the thick of unjustified, destructive conflicts, some focused their attention on cultural and educational issues and set out to promote science and logic.

Centuries on, in the world of Islam and in our region, we are going through the same bleak past, rife with war and conflict.

Today, neo-Crusaders and dull-witted, bigoted Takfiris have lined up against each other. The Takfiris who have turned into a plaything in the hands of different security and spy agencies are targeting the entire world of Islam.

Extremism will not change its identity as long as its roots grow [in the region], but it has significantly extended its reach beyond the previously limited borders. The Takfiris, who do not abide by the code of ethical conduct, display animosity toward historic heritage and civilization, ruin historic and religious sites and lay waste to anything which is linked with human history.

Prior to the emergence of the Takfiris, this region had been targeted by a mentality which focused on violence and plots to dominate [the Middle East] – a Zionist mindset which saw its followers commit inhumane crimes against Middle Eastern nations. Deir Yassin, Sabra and Shatila [the massacres of civilians, mainly Palestinians, at the hands of the Israelis and their mercenaries], and Al-Aqsa Mosque engulfed by the fire of bigotry and feud have been witness to the dark mindset of Zionism.

The Zionists have always promoted their own “racist supremacy” and have made plots via their media – over the past half a century – to spread their domination in the world of Islam. They are also trying to assert their influence on nations.

Faced with such crimes and measures to massage the truth, certain elements in the world of Islam – among them governments and nations – have raised the flag of resistance to defy this ominous phenomenon [Zionism] so that resistance against occupation and [respect for] freedom and human dignity can be materialized.

The Zionists, who have occupied the holy Quds, have failed to erase the question of Palestine in spite of the crimes they have committed against the Palestinians over the years. By the same token, murderous Takfiri groups such as ISIL and the al-Nusra Front will not be able to achieve their intended objectives by resorting to violence.

The Takfiri terrorists in Syria and Iraq cannot take away the freedom, culture and civilization of people. These are the things which have originated from the Islamic principles the holy Muslim Prophet, his infallible Household and their friends have promoted.

Big responsibilities should be taken and tough times should be ridden out so that we can do something to help rid the Islamic world and this region of this painful situation [being in the grip of violence and extremism].

All forces and players of the resistance front should be actively present in the fight against the racist Zionists, against Takfirism, ignorance and the bias some show because they misinterpret Islam.

We have another daunting task on our hands: we should clean up the image Takfirism has painted of Islam and show to non-Muslim societies the real picture, through logic and reasoning, of this divine faith.

The common denominator of the old and new movements which have resorted to violence – namely Zionism and Takfiris – is what they do to terrorize individuals and societies. Therefore, we should shoulder the responsibility not to let terror prevail and help future generations not feel ashamed and disgraced.