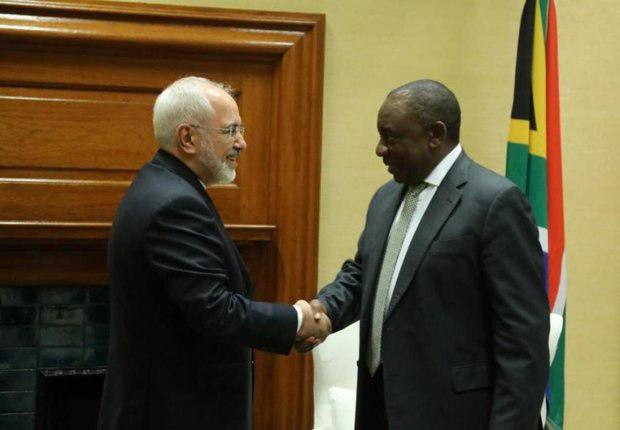 During the talks, they discussed ways of expanding and boosting mutual relations.

Speaking to reporters after the end of his three-day visit to South Africa, Zarif said he held concise and constructive negotiations during his stay in Pretoria.

“We held good talks on expansion of mutual relations and agreed to assign the two sides’ expert committees to press ahead with bilateral relations,” he said.

Zarif said the Iranian delegation held an important meeting with its South African counterpart at the level of experts and discussed a number of areas including trade, transportation and banking relations.

He also described his meeting with South African President Cyril Ramaphosa on Wednesday as good and constructive and said during the talks the African president underlined the urgency for expansion of the two sides’ relations.

Zarif said the president also assigned the South African expert committees as well as related officials to conduct studies in the mentioned areas.

According to Zarif, an expert delegation from South Africa is expected to visit Iran within the next few weeks to finalise deals aimed at enhancing mutual relations.

“In overall, I felt a strong political will on the South African side to expand bilateral ties. There are appropriate grounds for enhancing relations and hopefully the goal will be achieved during the upcoming visit of South African delegation to Iran for further talks,” he said.

Zarif described South Africa as a very close ally of the Islamic Republic which has always stood by Iran’s undeniable right for use of peaceful nuclear energy.

Zarif arrived in Pretoria on Tuesday at the head of politico-economic delegation.

He last visited South Africa back in October 2017 to attend the 13th meeting of the two sides’ Joint Commission.

The Islamic Republic severed its ties with South Africa in 1979 and banned doing any business with the African country in protest against its apartheid policies. However, in January 1994, Tehran lifted all trade and economic sanctions against South Africa and diplomatic relations were reestablished soon.