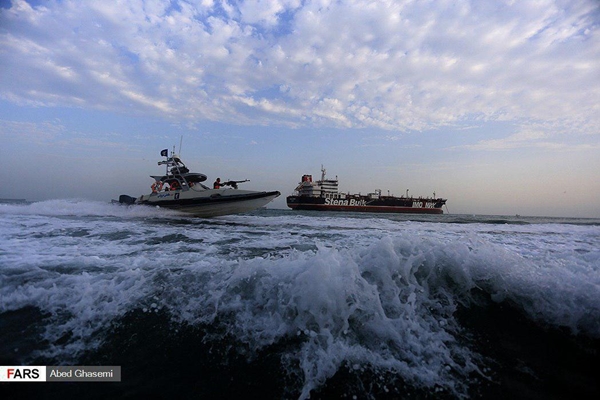 Senior Political Analyst Kayhan Barzegar has weighed in on the standoff between Iran and the UK over the seizure of an oil tanker by either side.

Barzegar has shared his thoughts in an editorial published by Shargh newspaper, the full text of which follows.

The seizure of a British-flagged oil tanker by naval forces of Iran’s Islamic Revolution Guards Corps (IRGC) is indicative of Iran’s steely resolve to take reciprocal action and tackle the hostile moves by those involved in the current economic war against Iran. In the meantime, there is a focus on the status of Iran’s regional power in the Strait of Hormuz and the Persian Gulf. Although the move (Iran’s legal seizure of the UK-flagged vessel) has fuelled tensions in relations between Iran and Britain and the West and given Western countries a new pretext to ratchet up their political-economic pressure on our country, I believe the move was necessary in order to ward off a”broader national security” threat.

In an announcement, the IRGC’s Navy said it had seized a British [-flagged] oil tanker called Stena Impero for failing to observe international maritime laws and regulations at the request of the Ports and Maritime Organization of Hormozgan Province. Recently, the British government seized an oil tanker carrying Iranian oil upon orders from its local government in Gibraltar under the pretext that it was carrying oil to Syria. From Iran’s standpoint, this move by the UK was a hostile move and direct involvement in the current economic war against Iran.

British authorities, who are seeking a solution to manage the Brexit crisis, deem it necessary to have close relations with the Trump administration in order to stabilize their occupational and partisan status. As the Tony Blair administration got on board with the United States in the war on Iraq in 2003 hoping the move would ensure Britain’s national interests, now UK officials have, contrary to the major tendency in Europe, stepped into a sort of non-essential adventurism against Iran. Indubitably, a lack of proper response to such a move can embolden other countries which are under the West’s pressure to take similar action and get involved in the current economic war against our country and challenge the status of Iran’s regional power.

Earlier, the violation of the Iranian airspace by a modern US drone near the Strait of Hormuz begged the question what Iran’s potential future reaction would be if such hostile moves continued by other governments. At that time, Iran’s prompt and clear message was that encroachment upon the country’s territory amounted to Iran’s national security red line, and Iran would definitely respond to the United States’ retaliatory move. This made Trump change his mind and dissuaded him from taking any military action against Iran due to reasons associated with the US domestic politics and the fact that his involvement in a costly and unpredictable war could jeopardize his re-election as US president in the upcoming vote.

However, the important point in these developments was that the anti-Iran coalition also referred to as the B-Team by Iran’s Foreign Minister Mohammad Javad Zarif, and the regional Arab regimes in particular, opened their eyes to the reality that the United States gives priority to its own interests while making calculations for its military moves against Iran, and that Washington is not taking any hasty actions against Iran for their sake. Such a development created a kind of confusion and a feeling of despair in Arab regimes, especially the United Arab Emirates (UAE), vis-à-vis Trump’s policies. Another reality is that the continuation and facilitating of the United States’ “maximum pressure” policy can, in the first place, seriously jeopardize the interests of this extremely vulnerable Arab country.

Now, Iran’s firm action, which has clear messages for the region and the West, begs the question whether regional Arab regimes are becoming more dependent on the US and the West for their security, or, on the contrary, are realistic and well aware of the dangerous consequences of an increase in regional confrontations and, hence, are trying to avoid any escalation of tension with our country. In my estimation, regional countries are more likely to go for the second scenario. Reaction by other important countries such as Russia, China, India and Turkey is clear, too. They are against any increase in the West’s influence in the region. Furthermore, they are sensitive about international energy security. Therefore, they will only be observers as usual and have a critical look at the West’s approach toward Iran.

In my previous editorial for Shargh newspaper, I mentioned that our country equates the disruption of its economic security with a direct threat to its national security, and definitely will adopt reciprocal measures, given its geopolitical advantage in the Strait of Hormuz, to show off the status of its regional power. Of course, to fully block the Strait of Hormuz has never been seriously considered as an option in our country’s strategic calculations. The reason is that such a move could prompt international reaction and sensitivity toward Iran’s role in jeopardizing global energy security, which, accordingly, could turn into a national security crisis for our country.

Moreover, our country itself is dependent on oil exports through the Strait of Hormuz, especially via export hubs and ports in the Persian Gulf region, and claims it is the main guarantor of security in the Strait of Hormuz. Accordingly, Iran’s reaction will be “calculated control over the Strait of Hormuz.” In other words, Iran will only take reciprocal action against those hostile states that are directly involved in weakening Iran’s economic security by preventing the export of petroleum, which is the country’s main source of forex income.

Using the deterrence lever in the Strait of Hormuz has a long, historical record in Iran’s defence strategy and has always been highlighted as an unchangeable strategic principle both before and after the triumph of the 1979 Islamic Revolution of Iran. Accordingly, Iran has, in recent years, extensively increased its symmetrical and asymmetrical defence power in the region and even, in some cases, came close to, but just stopped short of getting involved in direct confrontation with American troops in the region in line with its rights and responsibility. Now, Iran’s reciprocal move in seizing the British [-flagged] vessel might prompt tensions in the short run, but is a proper move as far as strategic calculations are concerned and should continue until the other side released the seized Iranian oil tanker.