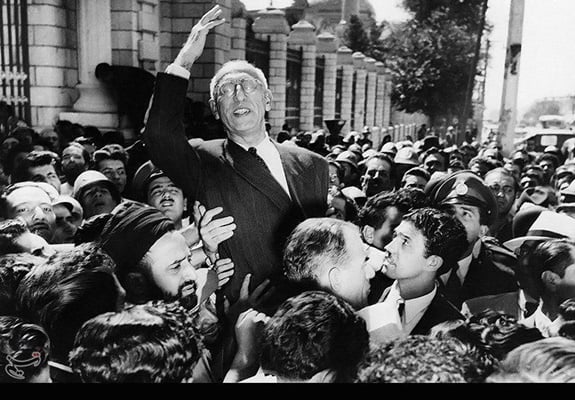 Iranian Foreign Minister Mohammad Javad Zarif says the US administration will fail to repeat history and change the democratically-elected government of Iran, as it did back in 1953 in a CIA-orchestrated coup.

“65 years ago today, the US overthrew the popularly elected democratic government of Dr Mosaddeq, restoring the dictatorship & subjugating Iranians for the next 25 years,” Zarif said in a Sunday tweet.

The ‘Action Group’ mentioned by Zarif is what the State Department has formed to coordinate and run an aggressive US policy toward the Islamic Republic.

The formation of the group was announced on Thursday by US Secretary of State Mike Pompeo, who said the initiative would be “directing, reviewing and coordinating all aspects of the State Department’s Iran-related activity.”

The group will be headed by senior policy adviser Brian Hook, who is currently the State Department’s director of policy planning. He will report directly to Pomepo.

“Our hope is that one day soon we can reach an agreement with Iran but we must see major changes in the regime both inside and outside of its borders,” Pompeo said in a brief address at the State Department.

“The Iranian people and the world are demanding that Iran finally act like a normal nation. The Iran Action Group will drive daily progress on these objectives, and I hope do much more,” he added.

The top US diplomat went on to say that the State Department is committed to a whole of government effort to change Tehran’s “behaviour.”

Pomepo’s announcement fell on the 65th anniversary of the CIA coup against PM Mosaddeq. The 1953 United States covert action overthrew Mosaddeq in favour of strengthening the monarchical rule of Mohammad Reza Pahlavi on 19 August 1953.

In August 1953, the British and American intelligence agencies initiated the coup by the Iranian military, setting off a series of events, including riots in the streets of the capital, Tehran, which led to the overthrow and arrest of Mosaddeq.

US State Department recently released a trove of confidential documents that disclosed more details of Britain’s role in the 1953 coup in Iran, an issue London strongly denied in the past.

On June 15, 2017, the US State Department released a long-awaited volume of declassified US government documents on the 1953 coup in Iran.

The publication of the documents put an end to decades of internal debates and public controversy after a previous official collection omitted all references to the role of American and British intelligence in the ouster of the legal government of Prime Minister Mohammad Mosaddeq.

Mosaddeq, who was convicted of treason by a court martial, served three years in solitary confinement and then died under house arrest in 1967.

His overthrow, which is still given as a reason for Iranians’ mistrust of the UK and the US, consolidated the Shah’s rule for the following 26 years until the victory of the Islamic Revolution in 1979, led by Imam Khomeini, which toppled the US-backed monarchy.

The Iranian premier had played a key role in the country’s 1951 movement that resulted in the nationalization of Iran’s oil industry, which had been mainly controlled by the British-owned Anglo-Iranian Oil Company (AIOC), now known as BP.

Experts say the 1953 coup, known as the coup, was aimed at making sure the Iranian monarchy would safeguard the West’s oil interests in the country.