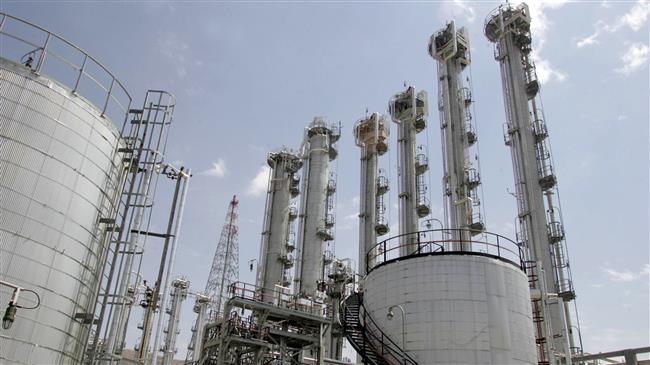 A high-ranking official at the Atomic Energy Organization of Iran (AEOI) says the country's nuclear activities have been entirely indigenized and the Islamic Republic has become self-sufficient in designing and manufacturing different types of centrifuge machines.

“One-hundred percent of Iran’s nuclear industry activities have been indigenized and today, we are self-sufficient in designing and manufacturing various kinds of centrifuges,” Ali Asghar Zare’an, special assistant to the AEOI head, Ali Akbar Salehi, made the remarks in an address to the opening ceremony of an exhibition of Iran’s nuclear industry achievements in the city of Kerman on Sunday.

Saying that the secondary circuit of the Arak heavy water reactor, which is being redesigned, will come on-stream within the next two weeks and its cold tests will be completed by March 2021, the official added that the Arak reactor will become fully operational within the next two years.

“Once other courtiers were not willing to give us a single centrifuge or see a centrifuge spinning, but now, thousands of centrifuges are running at Natanz and Fordow facilities,” Zare’an said.

He noted that an issue that is even more important than centrifuges is Iran’s ability to produce yellowcake, the strategic raw material, which all countries can buy, but no one would sell it to the Islamic Republic.

“We are now producing the raw material of yellowcake domestically and this move has greatly increased our bargaining power at the international level,” the AEOI official said.

“Those who claimed that Iran was bluffing are now purchasing our heavy water and we are able to produce up to 25 tonnes of heavy water based on our needs,” Zare’an pointed out.

Earlier this month, the AEOI head said the secondary part of the Arak heavy water reactor will become operational within the next three weeks.

“We will make the secondary part of the Arak Heavy Water Reactor Facility operational as early as the next three weeks; the reactor consists of primary and secondary sections whereby an overwhelming part of [nuclear] processes is done in the latter,” Salehi told reporters.

Iran’s President Hassan Rouhani said in July that the Arak heavy water nuclear reactor — which was agreed to be redesigned under a 2015 nuclear deal — will resume its previous activities after July 7 if the other signatories to the deal fail to uphold their end of the bargain.

“As of July 7, the Arak reactor would be restored to its former condition, which they (other parties) used to claim was ‘dangerous’ and could produce plutonium” if the other deal partners fail to fully act on their commitments under the accord, Rouhani said.

The agreement was initially reached between the P5+1 group of countries — the United States, Britain, France, Russia, and China plus Germany — and Iran in Vienna in July 2015. It is officially known as the Joint Comprehensive Plan of Action (JCPOA).

Under the JCPOA, Iran agreed to redesign the 40-megawatt research reactor, which is located in the central Iranian Markazi Province, to cut its potential output of plutonium.

However, US President Donald Trump unilaterally withdrew the US from the deal in May 2018 and unleashed the “toughest ever” sanctions against the Islamic Republic in defiance of global criticism in a bid to strangle the Iranian oil trade.

In response to the White House, Tehran has so far rowed back on its nuclear commitments three times in compliance with Articles 26 and 36 of the JCPOA but stressed that its retaliatory measures will be reversible as soon as Europe finds practical ways to shield the mutual trade from the US sanctions.