Iran sanctions must be lifted all at once: Rouhani 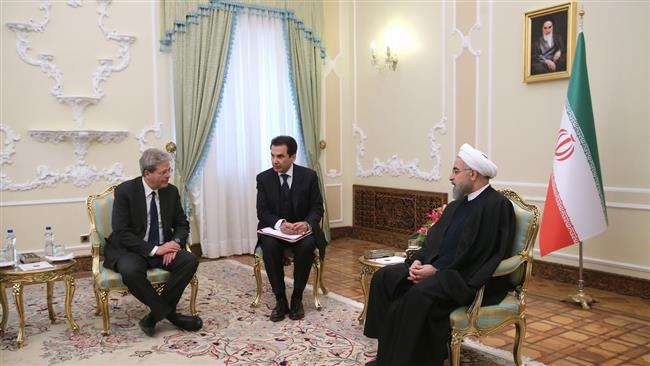 Iran’s President Hassan Rouhani has reaffirmed the country’s commitment to all its nuclear obligations, stressing that sanctions against the Islamic Republic must be lifted “all at once.”

“The basis of nuclear negotiations is [making] efforts to reach common views and mutual confidence and we believe that all sanctions should be lifted all at once,” Rouhani said in a meeting with Italy’s Foreign Minister Paolo Gentiloni in Tehran on Sunday.

He added that the sanctions, which have been imposed on Tehran in recent years on “incorrect bases”, have been detrimental to all including the European Union.

“Iran has always honored its commitments and it is currently clear to everyone that Iran is a completely serious side in the talks,” the Iranian president stated.

He emphasized that there is no option but negotiations to settle the outstanding issues about the Iranian nuclear program.

Iran and the P5+1 countries  — Britain, France, China, Russia, and the United States plus Germany – are making attempts to narrow their differences on the outstanding issues related to Tehran’s nuclear program ahead of a July 1 deadline for reaching a comprehensive deal.

He said further reciprocal visits by the two countries’ officials and stronger bilateral cooperation would be beneficial to the two sides, the region and the entire world.

The Italian foreign minister said his country strongly believes that a comprehensive deal over Iran’s nuclear issue would be in favor of Tehran, Rome and the whole of the international community.

Italy would do its utmost in supporting the nuclear negotiations, Gentiloni added, expressing hope that a comprehensive deal should give priority to sanctions relief for Tehran.