Iran: Rogue regimes at the helm in Washington, nuclear commitment a must 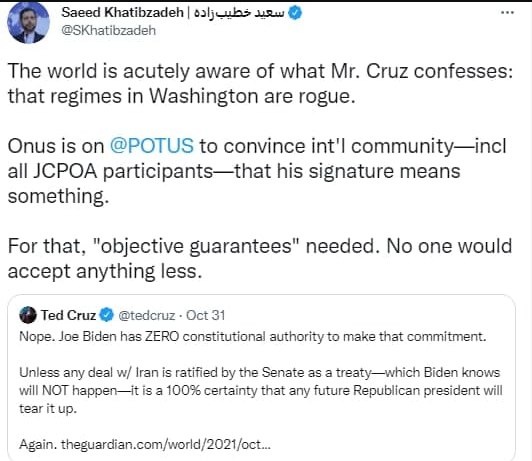 Iran has once again reiterated its call for the United States to give “objectives guarantees” that it will remain committed to its obligations under the 2015 Iran nuclear deal known as the Joint Comprehensive Plan of Action (JCPOA).

“The onus is on US President [Joe Biden] to convince the international community – including all JCPOA participants – that his signature means something,” said Iranian Foreign Ministry Spokesman Saeid Khatibzadeh in a tweet.

“So, objective guarantees are needed. No one would accept anything less,” he added.

Khatibzadeh made the comments in reaction to recent remarks by US Senator Ted Cruz.

“Joe Biden has ZERO constitutional authority to make that commitment. Unless any deal with Iran is ratified by the Senate as a treaty—which Biden knows will NOT happen—it is a 100% certainty that any future Republican president will tear it up,” said Cruz on Twitter.

Khatibzadeh also said the world is no stranger to what Cruz has confessed .“ The world is acutely aware of what Mr. Cruz confessed: that regimes in Washington are rogue,” said the spokesman.