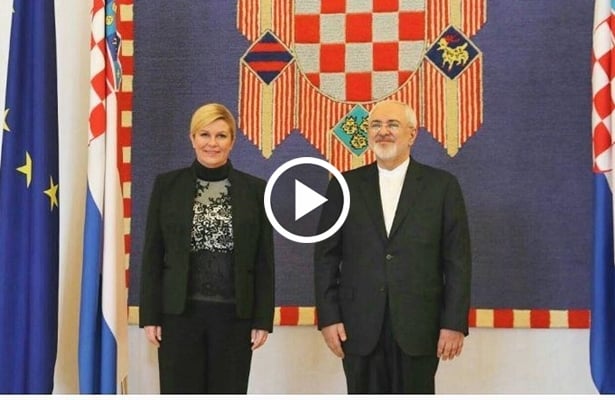 During the Thursday meeting, Zarif said the Islamic Republic can be a reliable source of energy, especially for Croatia’s oil and gas needs.

The Iranian top diplomat also announced that Iran is going to fund the construction of a power plant in Croatia based on combined cycle technology.

“We are ready to strengthen economic relations to the same level as our political ties,” he said, adding that some of the existing barriers will be resolved with prudence.

Iran’s foreign minister also commented on other areas of cooperation between the two countries saying that in the field of automotive and automobile parts, as well as in the field of new technologies and infrastructure the two sides can develop their cooperation.

Zarif also referred to international threat of terrorism, adding, “With regard to the common concerns of the two countries, including the fight against terrorism and extremism, Tehran and Zagreb can have closer bilateral or multilateral cooperation.”

He also pointed to the Croatian president’s 2016 visit to Iran, and stressed that the trip opened a new chapter in the two countries’ relations.

Hailing the “historical” friendship between the two nations of Iran and Croatia, Zarif said, “During this trip, a large business delegation is accompanying me. This is the third largest business delegation that has traveled to Croatia within the past year, and it shows the interest of Iranian businesses and entrepreneurs in working with Croatian counterparts.”

The Croatian President, for her part, referred to her official visit to Iran saying that “We have good and friendly political ties and are ready to expand our relations with Tehran.”

“Croatian businesspersons are keen on working with their Iranian counterparts. There are, of course, some problems, especially in the investment sector, which I hope would be resolved soon,” she added.

The Croatian side also expressed interest in investing up to $1 billion in Iran’s petrochemical sector.

The two sides also exchanged views on regional issues, in particular the current situation in Syria, Yemen and Afghanistan, as well as the issues in the Balkans.

The talks were held at the same time as a meeting was underway between Iranian and Croatian businessmen.

The increase of bilateral trade ties, which is currently around 20-50 million dollars annually, was one of the issues highlighted by the two countries.

The Iranian delegation headed by Zarif arrived in Zagreb on Wednesday night on the third leg of their regional tour. Croatia is the third destination of Zarif and his team during their tour of the Balkans and Eastern Europe.