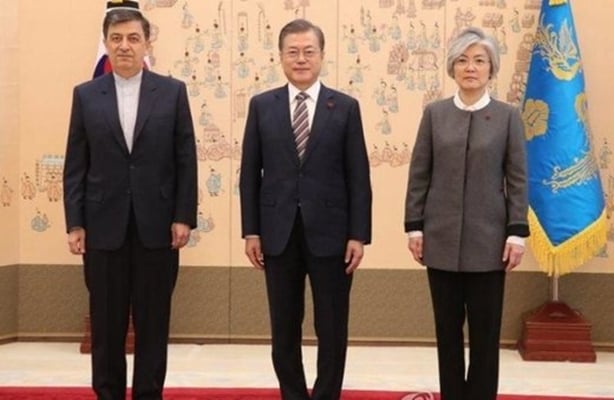 South Korean President Moon Jae-in has hailed the historical relations between Seoul and Tehran saying that his country attaches significant importance to Iran as a reliable partner.

Jae-in made the remarks Wednesday after receiving the credentials of Iran’s new ambassador to South Korea Saeed Badamchi Shabestari.

“The mutual cooperation between Iran and South Korea had been going on in the harsh conditions of the 70s, and even survived the war imposed on Iran by former Iraqi dictator Saddam Hussein in the 80s,” he said, after giving his warm regards to his Iranian counterpart Hassan Rouhani.

The Korean official then said the current problems in the development of the two sides’ relations would be removed in the future and expressed his country’s gratitude for the Islamic Republic’s support for pressing ahead with the reconciliation policies in the Korean Peninsula.

For his part, Iran’s new ambassador to South Korea gave President Rouhani’s regards to Jae-in. He also referred to the long-time relations between the two countries and underlined the need for developing and strengthening mutual cooperation in various political, economic, cultural and parliamentarian areas.

Shabestari also welcomed the role played by South Korean president in the denuclearization of the Korean Peninsula and expressed the Islamic Republic’s support for South Korea’s related plans and policies.

The ambassador also referred to the problems created in Iran-Korea relations by the US unilateral withdrawal from the nuclear deal, particularly in the banking area, over the past months and expressed hope that the problem could be resolved with the South Korean president’s cooperation.

Shabestari was appointed as Iran’s ambassador to South Korea on October 11.