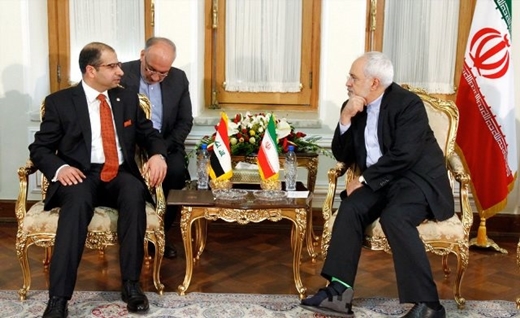 Iraq is one of the most influential Islamic countries that has to regain its status as soon as possible, Zarif said in a meeting with the Iraqi parliament speaker.

Zarif expressed hope that regional governments can solve their issues through dialogue.

Underlining the necessity of peace and stability in Iraq and partnership of all Iraqi groups in building the future of the country, Zarif said that Iraq is one of the most influential Arab and Islamic countries that has to regain its status as soon as possible.

The foreign minister said that Iran will stand by the Iraqi government and nation to help solve their internal problems, as well as regional and international problems, particularly in the campaign against violence and extremism.

The Iraqi parliament speaker congratulated Zarif and the Iranian nation on the conclusion of a nuclear deal with six world powers and said the deal would benefit the entire region.

Al-Jabouri hailed Iran’s support for the Iraqi nation, calling on the Iranian government to stand by Baghdad in solving its internal crisis and fighting extremism.