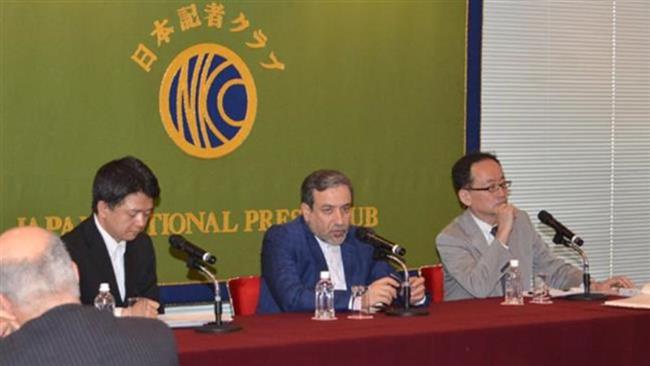 “Our policy is [based on] stability and peace in the region and we are ready to solve our issues with regional countries such as Saudi Arabia through dialog,” Araqchi told reporters at Japan National Press Club (JNPC) in Tokyo on Friday.

He added that Iran regards Saudi Arabia as an important country in the Muslim world.

“I think that the Saudi move to cut ties with Iran stemmed from a miscalculation,” the Iranian diplomat pointed out.

Saudi Arabia cut diplomatic ties and halted flights to and from Iran on January 3 following attacks on vacant Saudi diplomatic premises in the Iranian capital and the city of Mashhad by angry people protesting Nimr’s execution.

This as more than 2,400 foreign pilgrims, including 464 Iranians, were killed after two large masses of pilgrims converged at a crossroads in Mina, near the holy Saudi city of Mecca, during the symbolic ceremony of the stoning of Satan in Jamarat on September 24, 2015.

The diplomatic conflict between Tehran and Riyadh has caused problems for Iranian pilgrims seeking to perform the annual Hajj rituals.

The issuing of visas and security arrangements for the Hajj have been two sticking points in the talks pertaining to this year’s rituals.

Saudi Arabia says Iranian pilgrims should travel to a third country to obtain a visa. However, Iran has been insisting that Saudi Arabia issue visas through the Swiss embassy in Tehran, which has looked after Saudi interests since Riyadh broke off ties.

Araqchi also stressed the importance of regional peace and stability and Iran’s role in this regard and called for stronger cooperation with Japan in the campaign against terrorism and extremism.

In a meeting with members of Japan’s International Friendship Exchange Council (FEC) in Tokyo, Araqchi added that as acts of terror are threatening all countries across the world, Iran and Japan can broaden cooperation in countering terrorism.

He also said a planned visit by Japanese Prime Minister Shinzo Abe to Tehran would be very important in various trade and economic sectors given new developments in Iran’s relations with world countries following the implementation of last year’s nuclear agreement, dubbed the Joint Comprehensive Plan of Action (JCPOA), reached between Iran and the P5+1 group of countries.

The trip can be regarded as a new chapter in relations between Iran and Japan, the Iranian official added.

Abe plans to visit Iran in late August to strengthen economic ties between Tokyo and Tehran, according to reports by Japanese media. He will be the first Japanese prime minister to visit the Islamic Republic in 38 years.