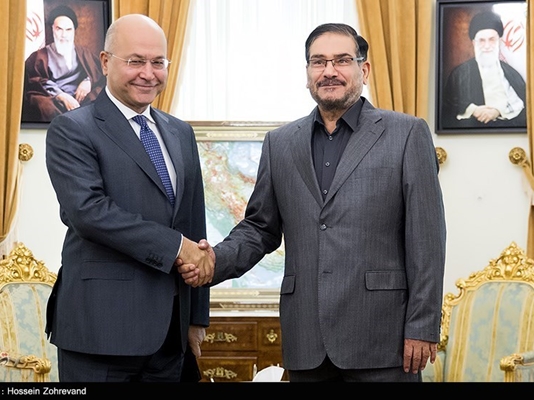 “The Islamic Republic of Iran has long had warm relations with Kurdish groups in Iraq,” Shamkhani said in a meeting with former prime minister of the Iraqi Kurdistan region, Barham Ahmad Salih, held in Tehran on Tuesday.

“The deep friendship between Iran and Iraqi Kurdish brothers is the result of cooperation and joint struggles throughout the past years in hard and tense battlefields,” he said, described the friendship as “unbreakable”.

Shamkhani further noted that national unity and solidarity among different Iraqi groups and sects are the overriding priority to deal with the security crisis that has beset Iraq.

“Iraq’s strategic interests and its regional power depend solely on strengthening an integrated and united Iraq,” he added, as reported by Tasnim.

He also warned that ignoring the goal of united Iraq would result in instability and damages, as is evident in the fact that Iraq’s Sunni Muslims have borne the brunt of attacks by the ISIS terrorist group.

Smashing ISIS will strengthen unity in Iraq and boost its national identity, which is why certain foreign countries and regional players are not interested in the settlement of the crisis and are propping up ISIS ideologies, Shamkhani said.

He further reaffirmed Iran’s support for unity among all Iraqi groups, including Kurds, and added, “Increasing integrity and friendship among the Kurdish groups for active partnership in the political and economic structure of united Iraq is the Islamic Republic of Iran’s unchanging policy.”

The Iraqi politician, for his part, hailed Iran’s constructive measures in the fight against terrorism.

Ahmad Salih also highlighted the importance that the Iraqi Kurdistan region attaches to ties with Iran.

“We regard the Islamic Republic of Iran as our strategic ally,” he underlined.

Since early 2014, Iraq has been facing a growing militancy by the Takfiri ISIS terrorist group and its allied militants, who have taken over areas in the country’s west and north. The crisis deteriorated in June last year, when the terrorists declared a so-called caliphate in the territories they had seized.

ISIS is threatening all communities In Iraq, including Shiites, Sunnis, Kurds, Christians, and others.

Back in December 2014, Iraqi Prime Minister Haider al-Abadi lauded Iran for standing by his country in very critical conditions, when other countries were hesitant to help the Arab nation in the face of threats posed by terrorists.

He said Iran rushed to help Iraq and “never ever had any doubts” even about assisting the Kurdish residents of Erbil when the city faced the threat of Daesh militants, while Americans were hesitating over whether to support Baghdad or not when the capital city was in jeopardy.