Iran Ready to Let Pakistan Know How to Use Popular Forces: IRGC 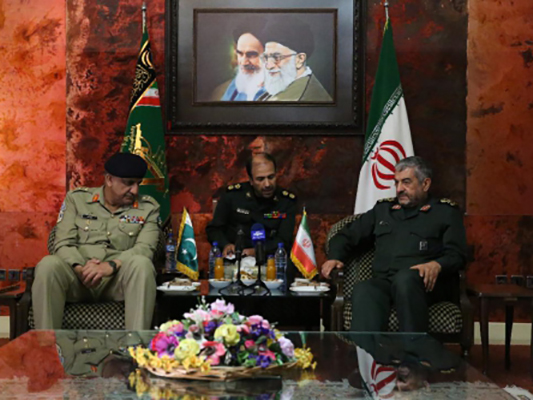 A top Iranian commander says the country is ready to share with Pakistan its experience in mobilizing popular forces against enemies.

“We were informed that the United States and the Zionist regime [of Israel] are making efforts to create insecurity in Pakistan like in other regional countries. Preventive measures and reliance on popular forces along with the Armed Forces and security troops can prevent the creation of insecurity in that country,” said the top commander in a meeting with Pakistani Army chief General Qamar Javed Bajwa.

“With 40 years of experience in confronting enemy threats, Iran stands ready to share with Pakistan its experience in the field of defence and popular resistance.

General Jafari also highlighted the role of popular forces in fighting terrorists in the region.

“When it was decided to use popular forces in the battlefield in Iraq and Syria like in the Holy Defence era (a term used to refer to the eight years of war launched by the former Iraqi regime against Iran in the 1980s), the organized presence of, and wholehearted defence by the people [fighting] along with the army turned the tables and brought about the defeat of Takfiris today,” the Iranian general said.

He also underscored that Iran and Pakistan will further deepen their relations in the future.

The top Pakistani general, in turn, praised the IRGC, saying, “The IRGC’s moves in aiding the Muslims nations in the region  has made me more interested in you.”

He then expressed his gratitude to the IRGC for expressing its preparedness to share its experience with Pakistan in the field of defence and mobilization of popular forces.

He said the enemies are seeking to drive a wedge between Tehran and Islamabad, and underlined that Pakistan is set to enhance its relations and cooperation with Iran despite all conspiracies and divisive measures by the enemy.

Despite all threats, the Pakistani general said, Iran enjoys a good status today.

He said Pakistan, too, has been under sanctions for years, but “the two nations have done well so far despite all problems.”