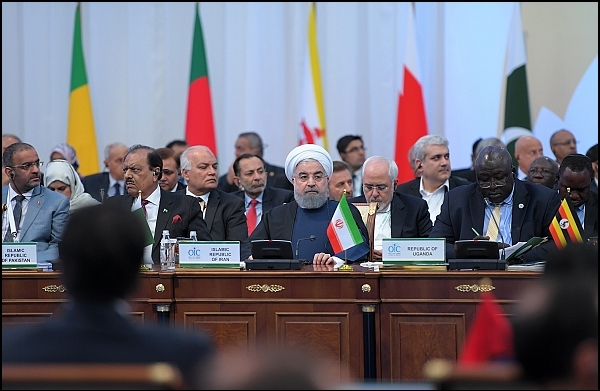 Iran’s president has called on Muslim states to rely on scientific diplomacy to create complementary potentialities in the Muslim world.

Iranian President Hassan Rouhani has mentioned several key issues in an address to the first Organization of Islamic Cooperation (OIC) summit on science and technology in the Kazakh capital, Astana. The highlights of his speech are as follows:

Despite having vast oil and gas reserves, Iran seeks to wean its economy off natural resources and move toward creating an economy dependent on productivity and innovation. With such potentialities, I’m telling you on behalf of the Islamic Republic of Iran that we have come to this summit for peace, coexistence and further cooperation with you friendly and brotherly states.

We have come here to say that “we can,” and that we should draw on science and technology as well as scientific diplomacy to seek common ground in order to further boost our capabilities and create complementary potentialities in the Muslim world.

If Islamic countries want to make their presence felt in the competition domain and in the field of new sciences and technologies, and play a constructive role in shaping the future of wealth and power constituents in the international community, they need to make policies and sort out their priorities at the national and international levels. The twelve priorities stipulated in Plan 2026 at this summit highlight several key points. The “human factor and social asset” play a pivotal role here. People are our most important assets. They should see that our investment in science and technology will result in their benefits, eradicate poverty and improve their health and social welfare.

This summit has what it takes to turn into a watershed in the history of scientific cooperation in the Muslim world. Let’s steer clear of plots to sow discord hatched by the enemies of Islam and bellicose powers which benefit from us remaining divided, and let’s open up new arenas for cooperation in the field of science and technology in order to further renovate countries. Let’s develop common political, economic and cultural ground in the Muslim world as much as possible.