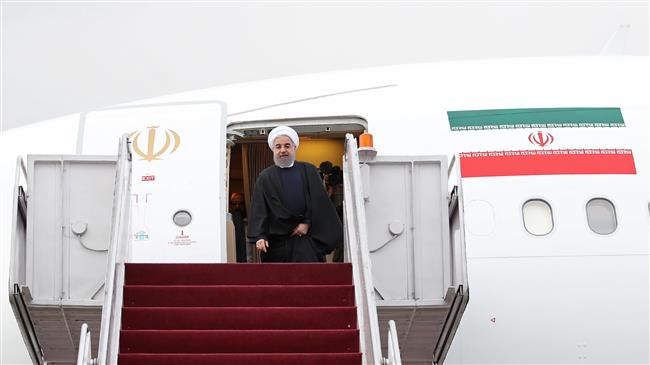 Iranian President Hassan Rouhani is to set off on a two-day visit to Turkmenistan and Azerbaijan to discuss ways of improving mutual relations and the latest developments in the region with those country's officials.

Heading a high-ranking delegation, Rouhani would leave Tehran for Ashgabat on Tuesday on the first leg of his tour at the invitation of his Turkmen counterpart, Gurbanguly Berdimuhamedow, Iranian president’s deputy chief of staff for communications and information, Parviz Esmaeili, said on Sunday.

After the official ceremony to welcome the Iranian president, Rouhani and Berdimuhamedow would hold talks and then the two countries’s high-ranking delegations would meet, he added.

The official noted that Iran and Turkmenistan would also sign documents for cooperation in the presence of the two presidents while the Iranian and Turkmen tradesmen would also discuss possible avenues for boosting trade ties.

He added that the Iranian chief executive would pay a short visit to the ancient city of Merv on Wednesday.

Esmaeili further stated that the Iranian president would head for Baku Wednesday evening to hold talks with his Azeri counterpart, Ilham Aliyev.

In the presence of Rouhani and Aliyev, Tehran and Baku are scheduled to sign several cooperation documents after which the two presidents will attend a joint press conference, he added.

The Iranian official said an economic meeting would be held on Thursday to discuss the strengthening of cooperation among the two countries’ state-run sectors and economic agents.