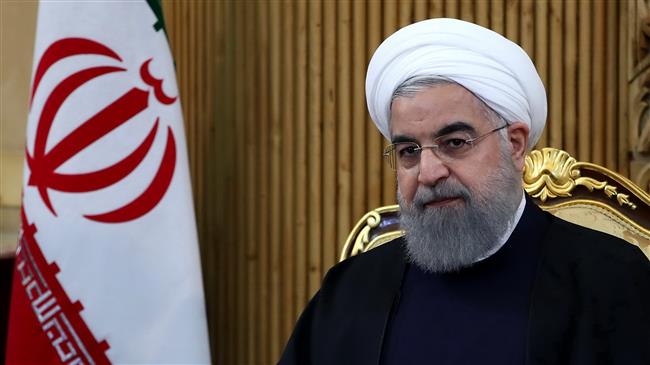 Iranian President Hassan Rouhani is due in Ankara next week to hold the second round of talks with his Russian and Turkish counterparts about the latest developments in Syria.

Rouhani will leave Tehran for Ankara on Tuesday at the invitation of Turkish President Recep Tayyip Erdogan, Iranian president’s deputy chief of staff for communications and information, Parviz Esmaeili, said on Saturday.

He added that the Iranian president would deliver a speech at the trilateral summit and hold separate meetings with Erdogan and his Russian counterpart Vladimir Putin to discuss ways to develop regional and international cooperation.

The Iranian, Russian and Turkish presidents held a trilateral meeting on the Syrian crisis in the Black Sea resort of Sochi in November 2017.

Rouhani lauded the defeat of the Daesh terror group in Iraq and Syria, but underlined the need for continued battle against terrorism until the eradication of all Takfiri terrorist outfits in Syria.

Iranian Foreign Minister Mohammad Javad Zarif and his Russian and Turkish counterparts, Sergei Lavrov and Mevlut Cavusoglu, convened in the Kazakh capital of Astana earlier this month and discussed the situation in Syria.

They reaffirmed the three countries’ strong commitment to Syria’s sovereignty and territorial integrity.

The Astana peace talks, which have usually involved delegations from the Syrian government and opposition, began in January 2017 with the mediation of Russia and Iran, two Syria’s allies, as well as Turkey, which backs several armed opposition groups operating against Damascus. Together, the three countries have been acting as guarantor states for the peace process.

The Astana process came after the guarantor states helped bring a ceasefire to Syria’s second city of Aleppo, and then to the entire Arab country, which has been witnessing foreign-backed militancy since 2011.

It resulted in the establishment of four de-escalation zones across Syria in mid-September last year, and was hailed by the United Nations for its contribution to a parallel process, which the world body has been mediating between Damascus and the opposition in Geneva.

Meanwhile, US President Donald Trump announced on Thursday that the United States would withdraw from Syria “very soon,” just hours after the Pentagon highlighted the need for American troops to remain in the war-torn country.

“We will be coming out of Syria, like, very soon. Let the other people take care of it now,” Trump said during a speech on infrastructure spending in the state of Ohio.

The US has reportedly more than 2,000 troops stationed in eastern Syria, in addition to several thousand others in the Arab country’s north.

The US and its allies have been bombarding what they call Daesh positions inside Syria since September 2014 without any authorization from the Damascus government or a UN mandate.

Trump’s remarks came on the same day that Russia said the counter-terrorism operation in Syria’s Eastern Ghouta was coming to an end as government forces and allied fighters advanced against foreign-backed militants in the suburban region near Damascus.

“The counter-terrorism operation in East Ghouta is over, only the city of Douma remains under the control of militants,” Russian Foreign Ministry spokeswoman Maria Zakharova told a briefing in Moscow.