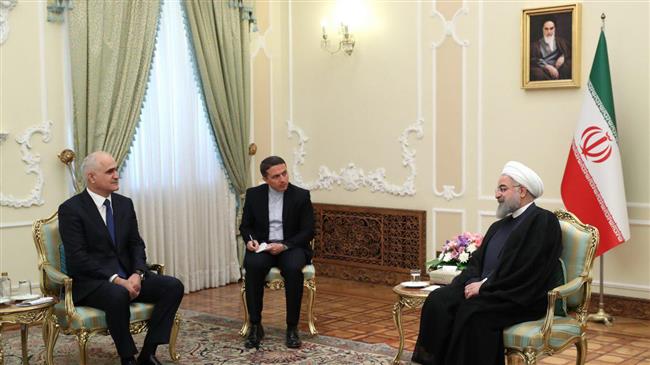 Iranian President Hassan Rouhani says Iran and Azerbaijan can turn into a connecting route between Asia and North Europe.

In a meeting with Azerbaijan’s Minister of Economic Development Shahin Mustafayev in Tehran on Tuesday, Rouhani added that the two countries are resolute to develop relations.

He expressed hope that an official visit by Azeri President Ilham Aliyev to Tehran in the near future would further increase cooperation.

“The Islamic Republic of Iran and the Republic of Azerbaijan have never and will never be a threat to each other,” Rouhani said.

He urged the two countries’ state and private sectors to make joint investment and strengthen cooperation in various fields.

For his part, the Azeri minister said the two countries’ are determined to expand relations and noted that joint ventures and trade transactions in recent years have considerably increased.

Mustafayev added that the history and culture of the Iranian and Azeri nations are intertwined and the expansion of bilateral cooperation would serve regional peace and security.

In a meeting in Tehran in November, the Iranian and Azeri presidents called for the expansion of relations in different sectors, including energy and transportation.

Rouhani said, “The trade and economic ties between Iran and Azerbaijan have made good progress and we should make more efforts to further tap into the two countries’ potential to meet the demands of the two sides.”