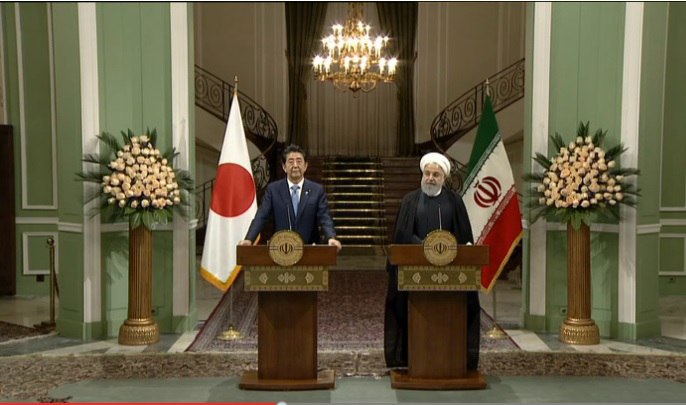 He added that during the talks, the two sides discussed mutual ties including Japan’s investment in southern Iran.

“We welcome that Japan is interested in importing Iran’s oil and resolving financial issues between the two sides because the will guarantees the expansion of two sides’ relations,” he said.

“We are happy that both Iran and Japan attach significant importance to the regional security and stability. As I told the prime minister, Iran is not an initiator of any war in the region even with the US but if a war is waged, we will give a crushing response to the enemy,” he said.

According to president Rouhani, the Japanese prime minister is highly optimistic about the future and believes that some positive changes are to be made.

“I told the prime minister that Iran is interested in preserving the Iran nuclear deal and will adopt some measures in this regard. I called on the prime minister to expand our mutual ties in nuclear area because both countries believe in peaceful nuclear program and both are against any nuclear weapons,” he said.

President Rouhani said the current tensions in the region are rooted in the US economic war on the Iranian nation. “Whenever the war is stopped, we can wait for positive changes in the region and the world.”

For his part, Japanese prime minister thanked Iranian government for its warm welcome and said today tensions are on the rise in the region. “As analysts warn, the chance of a military clash in the region is high but we should adopt some measures to prevent from such an incident. Regional stability is significant for global economic boost. Japan hopes to contribute to the regional peace and stability.”

He praised Iran as an ancient civilization in the Middle East and said Iran needs to play its key role to restore peace and stability in the region.

He cited Islam as the religion of peace and tolerance and said he has always been interested in Islam’s spirituality.

Abe described Iran’s full cooperation with the International Atomic Energy Agency as a positive approach and added Japan strongly calls on Iran to remain faithful to the JCPOA.

“We shouldn’t lose our hope for creating peace in the region. Today, we took the first step and we hope the goal would be achieved soon,” he said.