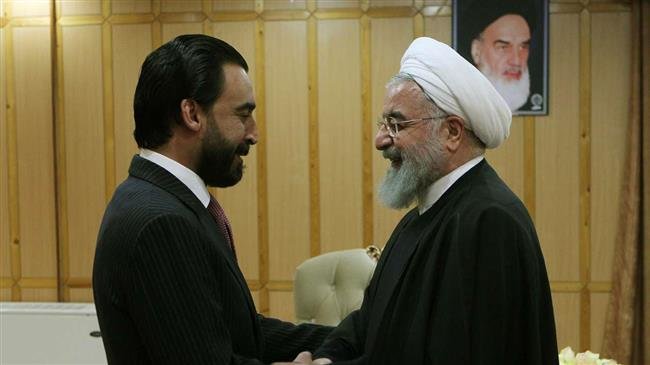 On Wednesday evening, Iranian President Hassan Rouhani received Iraqi Parliament Speaker Mohamed al-Halbousi on the sidelines of a visit to the northern Iranian Province of Gilan.

The two officials reaffirmed the resolve of their nations to further enhance cordial bilateral relations as well as cooperation in the battle against terrorism.

President Rouhani emphasized the significance of stability in neighboring Iraq, saying peace and security in both countries are intertwined.

He congratulated the Iraqi nation for defeating the “dangerous” Daesh terrorists and subsequently holding successful elections, stressing that the Islamic Republic “is ready to broaden bilateral cooperation in the areas of economy and infrastructure.”

The Iraqi speaker, in turn, stressed the need for stronger ties with its eastern neighbor, censuring the US’s campaign of economic pressure and sanctions against Iran.

Halbousi also thanked Iran for standing by the Iraqi nation in its fight against terrorism. On the back of Iran’s military advisory support, Iraqi armed forces managed to liberate their home country from Daesh, the world’s most notorious terror outfit, in late 2017.

Earlier in the day, Halbousi sat down for talks with Iranian Foreign Minister Mohammad Javad Zarif in Tehran over issues of bilateral importance, among them President Rouhani’s upcoming official visit to Iraq.

During that meeting, Ali Shamkhani, the secretary of Iran’s Supreme National Security Council, warned that the American military presence is posing security threats to the troubled region.

Referring to the futility of Washington’s military intervention in Iraq under the banner of fighting Daesh, Shamkhani said “experience showed the US is not only not ready to protect nations and governments against terrorists in times of crisis, but even employs all its logistical and intelligence resources to manage terrorism and use it as a tool” in the service of its own goals.

Halbousi, for his part, highlighted Iran’s significant role in establishing peace and security in the region, saying his country could not have defeated the terrorists without Iran’s help.