Iran President in Iraq to Expand Mutual Trade to $20bn 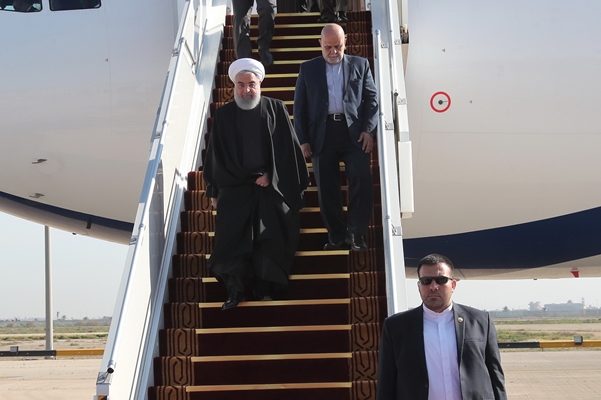 Iranian President Hassan Rouhani, who is currently on a historic visit to Iraq, says Tehran and Baghdad can easily raise their mutual trade to 20 billion dollars a year.

Rouhani made the comment in Tehran before leaving for Baghdad, which is his first visit to the Arab country during his five years in office.

Rouhani said his trip is mainly aimed at promoting mutual relations with Iraq.

“We stood by Iraqi people in tough days, and today when peace and security has taken hold in Iraq we still remain by the Iraqi nation’s side,” he said.

He underlined that the two countries can work together in a whole range of areas.

Rouhani touched upon the Iraqi president’s trip to Iran as well the recent visit to Tehran by the Iraqi parliament speaker, adding, “Numerous visits by both countries’ senior officials are taking place.”

President Rouhani said the Iranian and Iraqi nations have always had good and brotherly relations.

Elsewhere in his remarks, the president referred to the United States’ anti-Iran campaign.

“The Americans seek to promote Iranophobia, and they have always sought to drive a wedge between Shiites and Sunnis in the region,” he noted.

“They have always been trying to sow discord in order to both secure their interests and protect the usurper Zionist regime [of Israel],” said the president.

He said the Americans’ efforts have almost always failed in the recent year.

“We saw recently that the Warsaw meeting in Poland, which was aimed at turning into a victory for the US and exerting pressure on Iran, turned into a defeat for the US and grandeur for Iran, and even US allies in that meeting rejected the United States’ demand and said they would remain in the Iran nuclear deal and wanted to have economic and political relations with Iran,” said Rouhani.

He said Iran regards having relations with its neighbours as the most significant issue in its foreign relations.