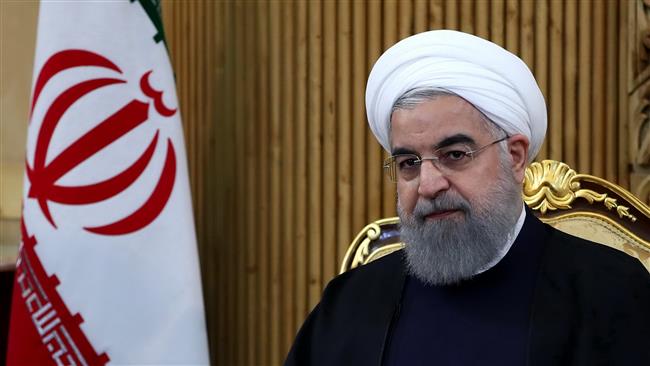 Iran's President Hassan Rouhani has called for mobilizing resources and adopting necessary measures to immediately determine the fate of crew members of an Iranian oil tanker that is still ablaze after it collided with a Chinese cargo ship in the East China Sea last week.

Rouhani held a phone call on Saturday with the Iranian Minister of Cooperatives, Labor and Social Welfare, Ali Rabiei, who is currently in China as the head of an ad hoc committee tasked with following up on the condition of the tanker and its crew.

He said that Iran’s Foreign Ministry needed to hold more negotiations to use resources of neighboring countries and the Chinese government in order to gain immediate access to and obtain information about the tanker’s crew members.

Rouhani called on Rabiei to ensure that the Iranian and Chinese rescuers were able to enter the tanker at the earliest.

The Sanchi oil tanker, carrying 136,000 tonnes of condensate from Iran to South Korea, has been in flames since colliding with the CF Crystal, a Hong Kong-registered bulk freighter, 160 nautical miles east of Shanghai on January 6.

Chinese rescuers on Saturday recovered two bodies on the deck of the tanker and its “black box.” A body found earlier this week is believed to be another of the 32 crew members, including 30 Iranians and two Bangladeshis.

The salvage team tried to reach the crew’s living quarters Saturday, but were turned back by high temperatures.

Earlier on Saturday, Rabiei said Iranian and Chinese commandos were heading towards the area of the still-burning tanker.

He added that the Iranian and Chinese commandos would reach the area on Sunday morning local time and noted that many ambiguities surrounding the incident would be resolved after their arrival.