Iran parliament to retaliate any new US Congress sanctions 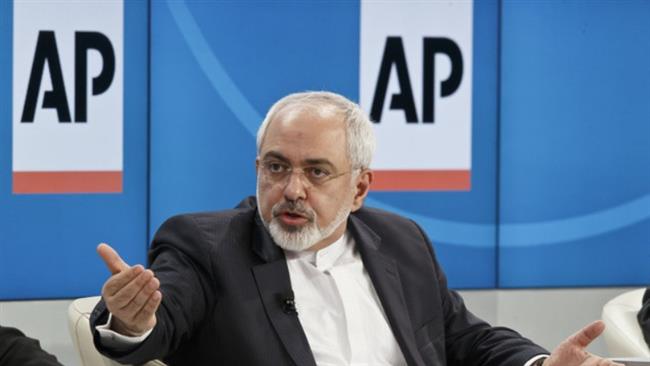 Mohammad Javad Zarif has said that the Iranian lawmakers will adopt a bill requiring the government to increase uranium enrichment level in case fresh sanctions are slapped on Iran by the US Congress.

Iran’s foreign minister says if the US Congress imposes fresh sanctions on Tehran, the Iranian parliament will retaliate by adopting a bill to further expand the country’s nuclear enrichment level.

The Iranian lawmakers “will adopt something requiring the government… to increase our (uranium) enrichment,” Mohammad Javad Zarif stated during a panel discussion at the World Economic Forum in the Swiss city of Davos on Friday.

Anyone who torpedoes the November 2013 interim nuclear agreement between Iran and P5+1 — the US, France, Britain, Russia, China and Germany — “should be isolated by the international community, even if it is the US Congress,” the Iranian minister added.

Zarif also noted that there is “a very good probability” to reach a comprehensive agreement over Iran’s nuclear program.

“We have an agreement that has the prospect of reaching a comprehensive agreement,” he said, adding, “Now it’s the time for the international community to stand firm against a process that will unravel an extremely important achievement.”

Rejecting claims that sanctions have forced Iran to the negotiating table, Zarif expressed that the country’s desire to “change our dynamics” in relations with other countries was the driving force for the talks.

Iran and the six world powers are in talks to secure a final full-blown deal over Tehran’s nuclear work.

Since the interim deal was agreed in Geneva in November 2013, the negotiating sides have missed two deadlines to ink a final agreement.

The Iranian diplomat also touched upon the ongoing problems and conflicts in the Middle East, saying that they are rooted in extremism.

A great number of the terrorists operating in Syria and Iraq have come from Western countries, Zarif said, urging the militants’ sponsors to stop supporting them in a bid to end extremism in the region.

The Takfiri militants have been carrying out horrific acts of violence, including public decapitations and crucifixions, against people from all communities, such as Shiites, Sunnis, Kurds, Christians, and Izadi Kurds, in Syria and Iraq.

The West and its regional allies, including Qatar, Saudi Arabia, and Turkey, are giving financial and military support to the militants.