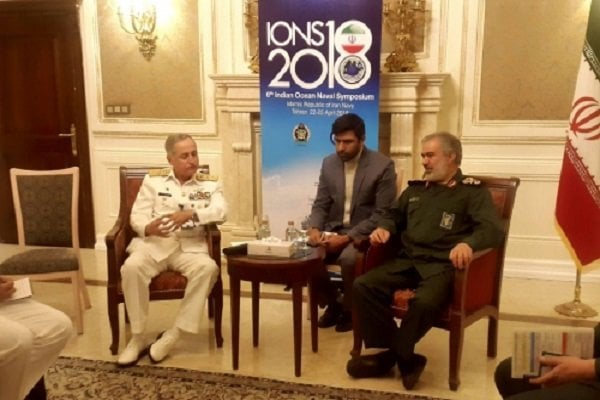 In a meeting with Pakistan’s Navy Commander Admiral Zafar Mahmoud on the sidelines of Indian Ocean Naval Symposium (IONS) in Tehran, Admiral Fadavi expressed satisfaction with the current level of cooperation between Iranian and Pakistani armed forces.

“The insecurity triggered by the US in the West Asia can equally affect Iran and Pakistan,” he was quoted as saying in a Farsi report by ISNA.

He referred to the US as the main source of insecurity in the region and said Tehran and Islamabad have already received heavy blows from the regional terrorism sponsored by Washington.

The Iranian commander then thanked Pakistani politicians and commanders for their prudent policies towards the US president’s ‘unconsidered remarks and stances’.

“During the eight-year war imposed on Iran by Iraq’s former dictator Saddam Hussein, the US officials adopted wicked measures against Iran which were thwarted by our navy,” he noted.

Admiral Fadavi said the US has been seeking over years to isolate IRGC in the Persian Gulf.

“About two and a half years ago, the Iranian navy seized two US boats and arrested 10 sailors in the Persian Gulf who had entered the Iranian waters. This sent a clear message to Washington that Iran can target its ships in the region if needed.”

He underlined that Iran’s power is not restricted to its missile and military capabilities and added Iranians also draw on the spiritual power of Islam to fight against the enemies.

The IRGC navy commander also called for further expansion of ties between Iran and Pakistan navies.

For his part, the Pakistan admiral warned that the enemies are seeking to sow the seeds of discord among the regional states and said Pakistan attaches great significance to Iran and its great nation.