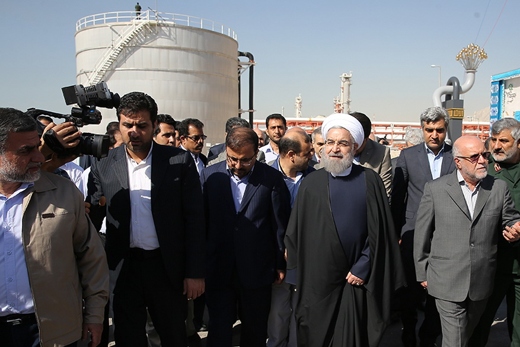 Iran brings online two more operations in its biggest gas field, marking the opening of the first such project all carried out by domestic entities in the face of Western sanctions.

President Hassan Rouhani attended inauguration of phases 15 and 16 of the South Pars field in Asaluyeh on Monday along with other senior officials, including his Petroleum Minister Bijan Zangeneh.

The operations with $6 billion of investment bring the number of phases producing gas in the field to 12, with another 15 phases under development.

Zangeneh said, “I hope with the lifting of sanctions which will happen in the next days as the implementation day nears, the development of joint fields will be carried out with better access to equipment.”

“Phases 15 and 16 of South Pars which were implemented and commissioned under sanctions will produce 56.6 million cubic meters of gas a day to meet domestic need for fuel especially by household, commercial and industrial consumers,” he said.

The two phases will also yield 75,000 barrels per day of gas condensate plus 400 tonnes of sulfur. It will generate $20 million a day of foreign exchange earnings, according to Ministry of Petroleum’s Shana news agency.

Iran shares South Pars with Qatar which calls it North Field. Qataris have raced ahead of Iran in developing the deposit in partnership with the likes of Royal Dutch Shell, Total and Exxon Mobil while sanctions have clipped Iran’s wings.

President Rouhani has already complained of “irregular extraction” from joint fields by neighbors which have taken advantage of sanctions against the Islamic Republic.

A full development of South Pars is estimated to generate $112 billion of revenues a year for Iran, which could rise to more than $120 billion after production from the field’s oil layer.

‘All done by Iran’

Phases 15 and 16 were carried out by a consortium of Iranian companies. Khatam al-Anbia, the construction arm of the Islamic Revolution Guards Corp, won the tender for the two phases in 2005.

“All phases of construction, installation and operation at phases 15 and 16 of South Pars have been done by Iranian experts,” Zangeneh said.

With more than 34 trillion cubic meters under its belt, Iran owns the world’s largest natural gas reserves but its share of the global trade in gas is less than one percent.

Officials hope to attract $40 billion in the gas industry after the sanctions are removed.

Currently, the country exports 10 bcm of gas per year. To put it in perspective, Russia exports about 150 billion cubic meters of gas a year.

“Natural gas will be the main fuel in the next 20 to 30 years,” international affairs director at National Iranian Gas Co. Azizollah Ramezani has said.

The priority is to pipe gas to neighbors with further plans for exports of LNG to Asia and Europe.