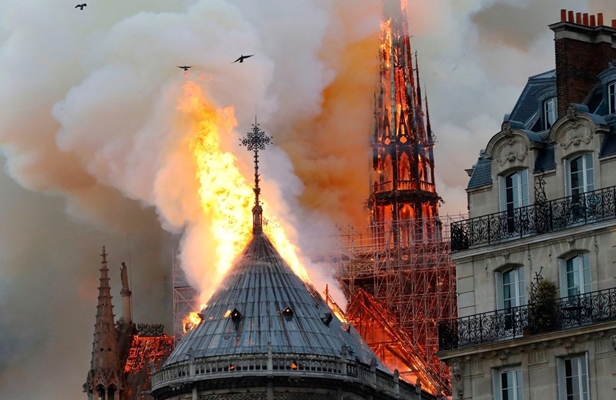 Iranian Foreign Minister Mohammad Javad Zarif has offered sympathy to the French nation and all Catholics in the world over the tragic fire that destroyed the Notre Dame Cathedral of Paris.

In a Tuesday tweet, Zarif said he was “saddened that Notre Dame … is partially destroyed after standing through wars & revolution for 800 years.”

He described the Cathedral as an “iconic monument dedicated to the worship of our one God & that brought all of us closer through Hugo’s literary masterpiece.”

The Iranian top diplomat also noted that “our thoughts are with the French and all Catholics.”

Paris’s Notre-Dame Cathedral went up in flames, leaving the nation awestruck and prompting fears that the historic structure could suffer unprecedented damage.

The fire began at around 18:30 (16:30 GMT) on Monday and quickly tore through the cathedral’s timbered roofing, where renovation work was underway. The blaze destroyed stained-glass windows and the wooden interior before firefighters could contain it.

The fire was fully extinguished after over nine hours of fighting, the Paris Fire Brigade announced.

“After more than 9 hours of fierce fighting, nearly 400 firefighters from Paris extinguished the appalling fire. 2 policemen and a firefighter were slightly injured,” the fire service said in a tweet on Tuesday.

It said the main structure of the 850-year-old Gothic cathedral had been “saved and the main works of art have been put somewhere safe, thanks to the combined action of the different services of the State working together.”

Meanwhile, French President Emmanuel Macron, who called the fire a “terrible tragedy,” said the worst had been avoided.

Macron also announced an international fundraising campaign to raise money for the rebuilding of the world-famous French landmark.

“We will rebuild it together. It will undoubtedly be part of French destiny and our project for the years to come,” Macron said outside the cathedral.