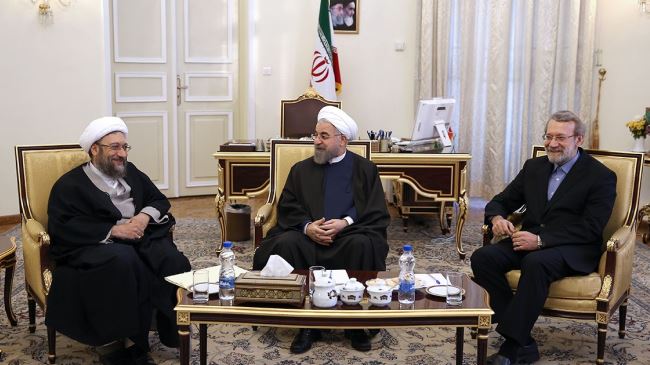 “If the opposite party in the negotiations with the Islamic Republic of Iran has the political will for a deal and avoids excessive demands, the conditions are prepared for the conclusion of a deal,” Rouhani said Wednesday evening.

He added that the Islamic Republic’s officials are united on core issues being discussed and the goals being pursued during nuclear talks with the five permanent members of the UN Security Council – the United States, Britain, France, Russia and China – plus Germany.

The Iranian president said Iran is looking for an agreement that would “preserve and guarantee the rights of the Iranian nation and further stabilize the [Middle East] region.”

Rouhani noted that a long-term deal over Iran’s civilian nuclear activities will be in the interest of all countries, emphasizing that such an accord would fix economic problems in the world.

Earlier on Wednesday, Representatives from the Islamic Republic of Iran and the six major world powers opened the second day of talks in the Austrian capital, Vienna, as part of their last round of negotiations to reach a nuclear agreement before the November 24 deadline.

The chief Iranian diplomat said on Tuesday that Washington should accept the peaceful nature of Tehran’s nuclear activities, emphasizing that sanctions do not resolve the issue and run contrary to what Iranian negotiating parties tend to think.