Iran Not to Wait for Permission to Launch Satellite: Qassemi 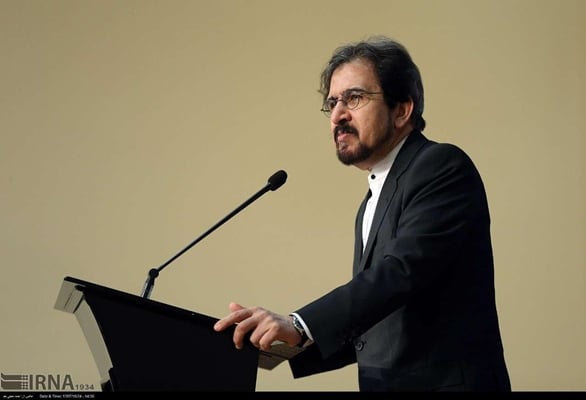 Iranian Foreign Ministry Spokesman Bahram Qasssemi says the Islamic Republic is dissatisfied with the European states over their shortcomings in implementing their pledges and added Iran will not wait for other states’ permission to launch satellite.

In his weekly presser on Monday, the spokesman underlined that none of Iran’s programs in aerospace area violates the United Nations Security Council’s resolutions including 2231 resolution.

“A domestically-made satellite is set to be launched into space. This is a civilian move with a totally scientific nature,” he was quoted as saying in a report by IRNA.

Elsewhere in his remarks, the spokesman underlined that the Islamic Republic is dissatisfied with the EU over its shortcomings in implementing the special financial mechanism to keep economic ties with Iran despite the US sanctions and added based on the received messages, Iran feels that despite pressures, the Europeans are willing to finalise the Special Purpose Vehicle (SPV).

“So, we cannot announce definitely whether or not the SPV will not be finalised,” he said.

Iranian Foreign Ministry spokesman then referred to the special situation of Iraq saying that Iran has already established good relations with Iraq.

“Given the mutual visits of two sides’ officials, Iran and Iraq have good ties in various areas,” he noted.

The Iranian diplomat then said the bulk of Iran’s non-oil exports go to Iraq, adding the two states are determined to show the world the principles of good neighbouring.

In response to a question on the possible visit of Iranian president to Iraq in near future, he said there is no special obstacle in the way of such visit.

He expressed hope that Iranian president visits Iraq in an appropriate time.

Iran’s spokesman also referred to the arrest of at least two Iranian citizens in the US over alleged spying saying the US has a clear hostile policy towards Iran and “unfortunately we see that the US officials level such accusations against Iranian citizens.

Elsewhere in the presser, the spokesman referred to the unexpected reactions by some Afghan officials to Iran’s negotiations with the Taliban and said the reactions surprised the Islamic Republic.

“We have heard some conflicting remarks from Afghan officials over the past few days made in reaction to our talks with the Talban. But as said earlier, we had made the required coordination with the Afghan officials before our negotiations. Meanwhile, we have briefed Afghan officials on the results of the talks during several meetings with them. Afghan officials are totally informed of our stances. The Islamic Republic supports peace process in Afghanistan and attaches importance to it,” he said.

The spokesman added it goes without saying that Afghan government should play the key role in the Afghan-Afghan talks and the Islamic Republic will not adopt any measure hampering the role.

“We maintain that the Afghan-Afghan talks serve as an appropriate mechanism to prevent from further regional tensions.”

He underlined that it is not yet clear for the Iranian government whether or not the remarks by some Afghan officials on Iran’s talks with the Taliban were their personal stance or the official stance of the central government in Afghanistan.

“Meanwhile, Iran is not the only country which is involved in talks with the Taliban. Interestingly enough, no Afghan official has yet objected other states’ negotiations with the Taliban. Now, their objections sound highly surprising to us,” he noted.

In response to a question on Iranian foreign minister’s recent remarks saying that the Taliban can have a role in the future government of Afghanistan, he underlined that Iran’s stance towards the Taliban is clear and the Islamic Republic maintains that Afghan-Afghan talks should be led by Afghan government.

“We don’t interfere in the internal affairs of Afghanistan. The country’s future should be decided by the Afghans,” he noted.

Qassemi also underlined that Iran will keep its contacts with the Afghanistan and support any efforts to restore peace and stability to the country.

The spokesman then referred to the next month Iran-focused conference organised by the US and Poland saying that the Islamic Republic has already received full information about the conference, its goals, and the measures that certain states are going to adopt during the event.