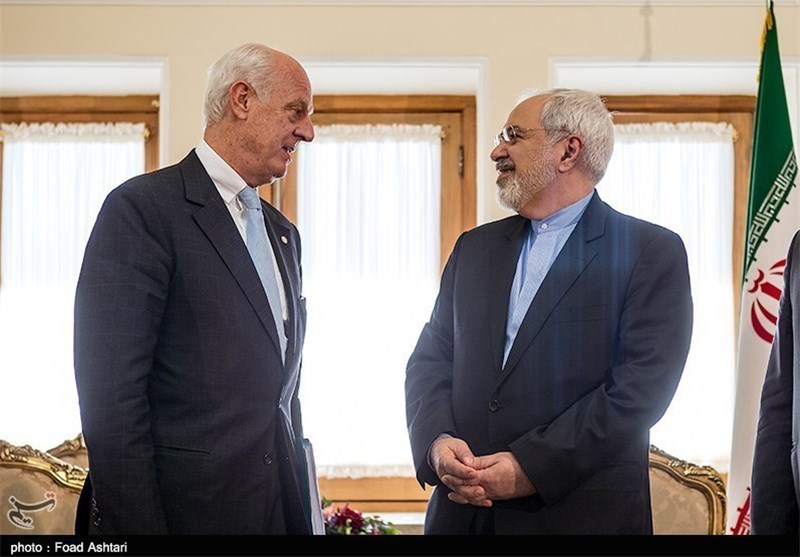 Iranian Foreign Minister Mohammad Javad Zarif reaffirmed the country’s “responsible and constructive” attitude toward regional crises, pledging that Tehran will not allow the tensions provoked by Saudi Arabia to undermine the efforts for the settlement of the crisis in Syria.

“We will not allow the Saudi tension-creating approaches to have a negative impact on the settlement of the crisis in Syria or to aggravate the problems of people in Syria, Yemen and Europe, which have risen due to the migration of poor Syrians,” Zarif said Sunday in a meeting with the United Nations Special Envoy for Syria Staffan de Mistura in Tehran.

Denouncing Saudi Arabia for its policy of creating “turmoil” in the region, Zarif said Riyadh is pursuing provocative measures to adversely affect the situation in Syria.

He said the Saudis targeted Iran’s embassy in the Yemeni capital of Sana’a as part of attempts to cover up their negative conduct, while Iran feels responsible to protect the embassies of foreign countries.

“The Islamic Republic of Iran has always acted responsibly and constructively on crises,” Zarif added.

The UN envoy, for his part, hailed Iran’s constructive role in the settlement of the crisis in Syria.

De Mistura noted that efforts are underway to release a single list of the wildly different opposition groups in Syria for negotiations with the Damascus government.

The Austrian capital of Vienna has played host to two rounds of multilateral talks over the past months for finding a way out of a lingering crisis in Syria.

Senior diplomats from a number of influential countries, including Iran, the US and Russia, as well as envoys from the United Nations (UN) and the European Union (EU) have attended the negotiations.